For more than three decades now, Keith Grimwood and Ezra Idlet — otherwise known as Trout Fishing in America — have entertained audiences of all ages with their artfully seasoned blend of roots rock, traditional folk, and anything else they decide to stuff in their musical grab bag. As longtime fans know, it’s a mixture that lends itself naturally to family music — the band has been releasing CDs for kids alongside their “regular” albums since the early ’90s.

With the release of the first Trout Fishing in America book/CD combo, My Name Is Chicken Joe, in 2009, Grimwood and Idlet seem to have started a whole new franchise for themselves. Chicken Joe, the farm-dwelling cat who sleeps in a henhouse, has returned with a new adventure: Chicken Joe Forgets Something Important, which bundles an album of brand new family tunes alongside another beautifully illustrated hardcover book. It’s a really lovely package, and to welcome Chicken Joe back to our shelves, we knew we had to talk to Keith and Ezra about the project.

Happy new release day! What kind of response are you seeing so far?

Keith: So far, it’s been fun. We just put out this little video thing that came out on YouTube and stuff, and it’s doing really well.

Ezra: The local station came out and filmed piece on us earlier this week — that was pretty nice, too.

Ezra: Absolutely. From beginning to end, the songs were written with the story in mind — and we also wrote the story by narrating and taking on different characters, which was a lot of fun. It was territory we had never explored before.

Keith: We’re working on doing it as a performance piece, where we read it by becoming the characters. As we read it, we play the music in the background, and we take on those characters. We’re going to be doing it as part of the kids’ show, which should be a lot of fun.

What led to your decision to enter that new territory — to write an album around a story?

Keith: Well, we had the story, and we wondered which songs were going to go with it. So what we did was, we went back through the story and pulled out key phrases. So often, a phrase will spark a song — you hear someone say something, and it serves as inspiration.

It was the same with this story. You know, there’s a bit in there about how Chicken Joe — who is a real-life cat, he’s my cat, and he really does sleep in a henhouse — needs 16 or 17 hours of sleep a day. I’ve always thought that was funny, so it became the song “16 or 17 Hours of Sleep.” At another point in the story, someone mentions “the big game.” I mean, how many times have you heard someone use that phrase? That became a song. We just went and expanded different pieces.

Keith: In the story, Chicken Joe leaves the henhouse and goes walking toward the farmhouse, and to get there, he has to go through the pines. Well, between my henhouse and my house, there’s a stand of pines, and I just love it. I have this little path through there, and I wouldn’t trade it for anything. So we wrote a song called “Through the Pines.”

Ezra: What’s also nice about all this is that it allowed us to explore different musical sides of ourselves. “Through the Pines” is a bluegrass piece with a little bit of gospel, which was all kinds of fun to do.

Keith: “16 or 17 Hours of Sleep” has nothing to do with gospel or bluegrass — or sleep!

Ezra: “The Big Game” is a stone-cold rocker with some amazing slide guitar.

Keith: And “Where Did Everybody Go?” is just a sort of sad and wistful song. And it all works. I don’t know how.

It sounds like doing things this way did not make the songwriting process more difficult for you.

Ezra: You know, one of the great things about doing kids and family music is that you don’t have to be tied to one specific form of music. You can say “kids and family,” and all music is accepted. You get into the adult world, which we do, and they want to know: is it roots music, is it Americana, is it blues, rock, reggae…you’ve got to specialize. Somehow, when it comes to family music, we’re allowed to do whatever it is we wanna do. Which is what happens in our live show, anyway.

Keith: We do base our songs on real-life experiences. As an example, when we moved to Arkansas, which was 19 years ago, I had never lived in the country. And the people who lived in my house before me had a couple of roosters, which they essentially abandoned when they moved out. I always thought roosters were supposed to say “cock-a-doodle doo” or something like that when they crow at the crack of dawn, but these guys — I swear — would get into the trees and go, [shouting] “ROCK AND ROLL!” and roosters yelling “rock and roll!” would be in my dreams, so of course, it had to end up in this book. Chicken Joe’s roosters had to say “rock and roll.”

That’s a great bit early in the book, and it had my kids laughing right away.

Keith: It’s so true, though!

Ezra: Take a look at any lead singer in any rock and roll band, and you can replace him pretty well with a rooster. Steven Tyler, Mick Jagger… [laughter]

I’ve spoken with a number of family performers who are ambivalent about introducing visual elements to their acts, just because we’re all hardwired to notice motion, and it’s especially irresistible to kids, who will stop and stare at just about anything on TV. Now that you’ve sort of crossed that threshold with these books, what’s your thought on the issue?

Ezra: We are the visual component. We walk on stage, I’m 6’8″ and Keith is 5’5″…you know, we’re that visual component just to begin with. We’ll use any tool at our hands to move an audience, and that includes the visual difference between the two of us, and the way we move on stage.

Keith: Yeah, and Ezra and I will sort of role play sometimes, because as a duo, it’s very easy. And because we have such different personalities. I’m the smaller one, but I’m the “adult” as far as personality goes — I’ll be the one who makes sure we’re there on time, and takes care of the responsible things. Ezra is more creative — he’s more the child in this thing. And so when we take on those roles, kids take to Ezra so quick, because he can come across as an overgrown kid. I’m more serious, honestly, and we get along really well. That dynamic is natural for us. 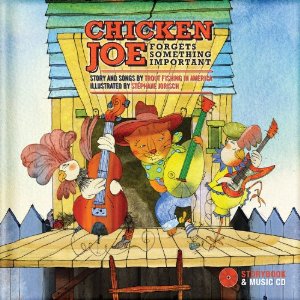 Ezra: At the end of a show, we’re always available for the audience, and what’s very interesting is how all the extrovert kids seem to gravitate toward me, and the studious ones go to Keith. He’s less physically imposing, and they can tell he takes things more seriously.

Keith: The Suzuki violin students come to me. Ezra gets climbed on. [Laughter]

Now that Chicken Joe is an illustrated character, have you been approached about having him star in a kids’ TV series or film?

Ezra: We haven’t. But if you’ve got any friends in that area…tell them to come on over! [Laughter]

I love the illustrations in these books. They’re just as intrinsic as the music. Which seems like it should be an obvious thing to say, but they’re just so distinctive, and so much fun to look at.

Ezra: Stéphane Jorisch is a phenomenal artist, and I do love his interpretations of the characters. Sometimes they’re not exactly what we had in mind, but he has a consistent vision, and I love his watercolors over the pen and ink. It’s just beautiful.

Keith: The idea just brings together so many wonderful things. We both love to read, and we both love music, and when you have something you enjoy, you just want to share that with your kids. Watching a child with a book, watching him come to the page, looking at a physical book, listening to music, reading along — it just brings all these elements together for me. I really like it.

Have you given any thought to another book?

Ezra: We have to see what happens. It isn’t out of the question at all. We really enjoy the process of fleshing out an idea in a larger context, and we have some other projects in mind for larger things.

You’ve been making family music for some time now…

Keith: Ezra and I have been playing together since 1976, and we did our first show for kids as early as ’77. We were asked to play at a preschool by a teacher who thought it would be important for kids to see that music comes from people, not just the radio, and we thought it was a great idea. For a long time, we did those school shows in tandem with our regular club shows, where we played for people our age. And then people our age started having children of their own, and they were looking for a place where everyone could show up at the same time, and that’s when the family shows started emerging.

Over that period, you’ve borne witness to the rise of the kindie scene, and I’d like to get your perspective on all that, as guys who were out there doing it before it became a hip destination for ‘grown-up’ artists.

Ezra: It is so exciting to see the inclusion of children and families in really strong music. Early on, it felt like we were sort of all alone doing this thing, but as we’ve gone along, I’ve met some kids’ artists who have just knocked my socks off. Fabulous writers, fabulous players — it isn’t just somebody with a synthesizer and a drum machine trying to tell kids how to act. It’s real creativity, and real bands, playing at the top of their craft. I’m really happy and proud to be part of it all.