Today’s youth are in desperate need of a family-friendly funk infusion, and just in time, here comes the leadoff single from Sugar Free Allstars’ upcoming album All on a Sunday Afternoon. Featuring the duo’s trademark drum kit kick with Hammond special sauce, “Sunday Afternoon” makes extra room for the additional song stylings of Trout Fishing in America’s Keith Grimwood and Ezra Idlet. Check it out below, and visit the band’s site to get more information on the new album, due June 12:

For more than three decades now, Keith Grimwood and Ezra Idlet — otherwise known as Trout Fishing in America — have entertained audiences of all ages with their artfully seasoned blend of roots rock, traditional folk, and anything else they decide to stuff in their musical grab bag. As longtime fans know, it’s a mixture that lends itself naturally to family music — the band has been releasing CDs for kids alongside their “regular” albums since the early ’90s.

With the release of the first Trout Fishing in America book/CD combo, My Name Is Chicken Joe, in 2009, Grimwood and Idlet seem to have started a whole new franchise for themselves. Chicken Joe, the farm-dwelling cat who sleeps in a henhouse, has returned with a new adventure: Chicken Joe Forgets Something Important, which bundles an album of brand new family tunes alongside another beautifully illustrated hardcover book. It’s a really lovely package, and to welcome Chicken Joe back to our shelves, we knew we had to talk to Keith and Ezra about the project.

Happy new release day! What kind of response are you seeing so far?

Keith: So far, it’s been fun. We just put out this little video thing that came out on YouTube and stuff, and it’s doing really well.

Ezra: The local station came out and filmed piece on us earlier this week — that was pretty nice, too.

Ezra: Absolutely. From beginning to end, the songs were written with the story in mind — and we also wrote the story by narrating and taking on different characters, which was a lot of fun. It was territory we had never explored before.

Keith: We’re working on doing it as a performance piece, where we read it by becoming the characters. As we read it, we play the music in the background, and we take on those characters. We’re going to be doing it as part of the kids’ show, which should be a lot of fun. END_OF_DOCUMENT_TOKEN_TO_BE_REPLACED 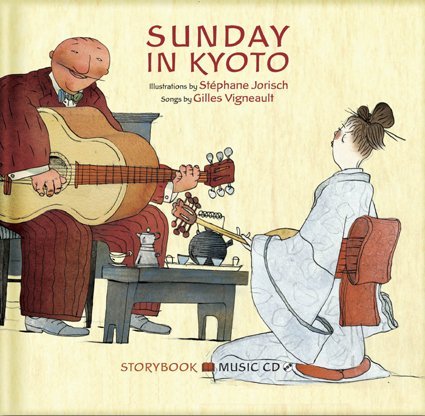 A collection of 14 Vigneault songs performed by Canadian singers including Patrick Watson, Thomas Hellman, Coral Egan, and Vigneault’s daughter Jessica, Kyoto highlights Gilles’ gentle whimsy; the title track, for instance, is about a Cajun musician who lives in Kyoto with his Japanese wife, where they lead jam sessions and perform for Buddhist monks (“Let me tell you about Yoshi / Fingers dancing on the harp / Has a pond of swimming carp / Just don’t say the word ‘sushi'”). Other songs continue in the same vein, from the sprightly “When the Danse Began” to the mock-operatic “Four Eggs” and effortlessly catchy “The Great Big Kite.” The arrangements are clean and jazzy, with charmingly silly vocal contributions from the singers, and the lyrics manage to be appropriate and educational while also avoiding your typical well-worn kids’ music subjects (one notable exception is “One, Two, Three, ABCD,” which will use copious amounts of Jew’s harp and lyrics about bovine peeing and farting to squeeze gales of laughter out of your children). END_OF_DOCUMENT_TOKEN_TO_BE_REPLACED