Judging from the sales numbers, most of us don’t think about classical music very often these days — and when we do, we tend to think of it as stuff for grown-ups. But kids can — and often do — love classical just as much as anything by Dan Zanes or Justin Roberts. Songs don’t endure for hundreds of years without being able to stand on their own, after all.

Nevertheless, classical could definitely use a family-friendly outreach effort, and for years now, it’s been getting it from Stephen and Bonnie Ward Simon, the couple behind the Stories in Music series that helps tell the tales behind some enduring classics — including “Peter and the Wolf,” “Swan Lake,” and now, with their latest release, Handel’s “Water Music.”

Adding entertaining narration — and occasionally lyrics — to the music, the series informs budding classical fans (and their parents) about the lives of the composers, the stories behind the songs, and the historical context of it all. It’s educational and it’s fun, and we knew we had to get the Simons on the phone for a chat about My Name Is Handel. Our conversation follows.

Let’s start off by talking about the Stories in Music series in general, and how it started.

Bonnie: Well, it came out of the series we did at the Kennedy Center. In fact, the whole idea of doing concerts for parents and children — or, as we like to call it, multi-generational education — came from a two-fold issue. One was that, when I became director of the Washington Chamber Symphony, we noticed a void in the audience between the ages of, say, 30 and 45. Where are they and why don’t they come? As a fellow parent, I said, “Well, they’re tired.” They come home from work, they do homework with their kids…you know. So we wanted to give parents something fun they could do with their children.

It also came about, in part, because of an experience we had with our son Basil when he was three. Stephen had been conducting at the Kennedy Center, and Basil and I came down from New York, and he begged me to go to the evening concert. He’d been wonderful, so I got a babysitter and bought us seats on the aisle, and told the babysitter that the moment Basil made a noise during the show, I would be handing him off to her and they’d head out the back door of the hall.

Well. It was a sold out house, standing room only, and I was already feeling the evil eye from adults who didn’t have seats and were wondering why this child was taking one up, but everything was fine. And then there was that pregnant silence between the door opening and the conductor walking out to take his place at the podium. Stephen got halfway out, and suddenly Basil was out of his seat with both arms in the air, yelling “DAD!”

[Laughs] I thought I would die. I vowed never to go through that again, and I knew we needed a place where kids could go to hear high-quality music in child-sized portions. That means not asking them to sit for more than 25 or 30 minutes, and always having an intermission. They have to be able to go out and go to the bathroom, or buy candy, and they have to come with an adult. So I put together all these ideas and told Stephen I thought we could put together a series that would be fun and informational for all ages. 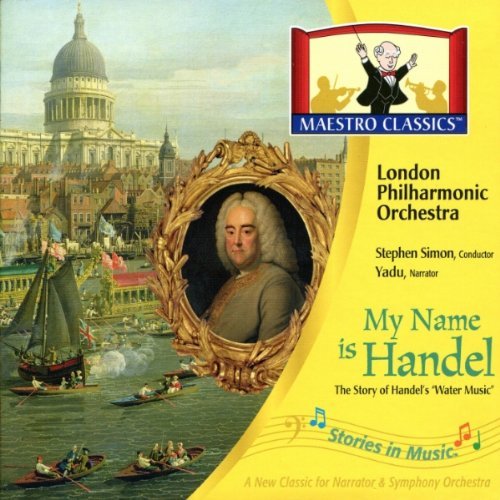 Stephen: And with a sense of humor!

Bonnie: Yes, definitely. So many people think classical music is this bitter pill that needs to be swallowed because it’s good for you. It shouldn’t be that way — for adults or for children. You have to look forward to it.

Stephen: Even the person giving them has to look forward to it. [Laughs]

Bonnie: So we did the first concert, which we thought would be this sleepy thing, and the Washington Post did a full-page story where they called it the best thing since Leonard Bernstein, and we ended up having 200 families on the waiting list.

Stephen: It isn’t as though there’s no audience for this — there is a tremendous audience. But you have to allow them to enjoy it.

Bonnie: The concert series went on for years, and people often asked us where they could find the performances on CD, and we always had to tell them that there weren’t any. Finally, in 2004, I said to Stephen, “Now is the time. This is our gift to the next generation.” There were a few things we wanted to include from the shows, like encouraging listener participation, and the booklets I always had put together for the concerts. And we wanted to include music from different genres, because we think the field is so very wide. So often, people focus on only one genre. And we worked very hard to find extremely talented musicians for these recordings.

So we started with Mike Mulligan’s Steam Shovel, and we’ve gone on from there. And the great thing is that even though this is a niche market within a niche market, everyone who takes these CDs out of their cupboard really wants them. We’ve won 48 awards now for this series, and that’s very gratifying.

It’s nice to hear you describe the history of the series like this, because I think it illustrates the intelligence and purity of intent that went into it. It would be easy for someone, particularly a classical purist, to look at these as adding an unnecessarily pandering layer to music that stands pretty well on its own.

Bonnie: Oh yes, we get a couple of those every once in awhile. And all I can think is, “God, they’re humorless.” Someone said they thought “My Name Is Handel” lowered the quality of the music. The purity of the product. And I thought, “If you had any idea of the number of people who have approached us on the streets in Washington and gone [singing] ‘My name is Handel…’ maybe you’d have a different view.”

They always need to make the audience smile. You know, like we did with “Swan Lake”: [singing] “Tchaikovsky wrote a great ballet / Its name was ‘Swa-a-a-a-n Lake.”

Stephen: I blame that one entirely on my wife.

Bonnie: Nobody will ever confuse it with “Sleeping Beauty” again! Oh, you can’t take yourself too seriously. Those people need to understand that all classical music was written as entertainment. We tend to forget that. It wasn’t intended to improve your moral character.

Stephen: Although it may have that outcome.

Obviously, classical music is facing a number of challenges right now, particularly on the orchestral front, but you’re able to watch multi-generational audiences experience this music at your shows. Are you optimistic about classical’s future?

Stephen: Enormously. Because we’re enthusiastic about what the music says. It’s the music, after all.

Bonnie: I think the greatest danger to this music — and to all art — is what’s happening to our education system, and the lack of understanding that we need a diversified education to support the arts. We need painting, cooking, music — we need all of these classes to encourage multiple intelligences. Math and English alone don’t do it all. Test scores don’t do it all. Seeing these programs disappearing from schools is what’s most worrisome to me, because all you’ll be left with is a very small, elite group of people who experience classical music, or go to museums.