If there’s one thing a diehard music fan loves to complain about, it’s lack of variety. It’s less of a problem now than it used to be, but during the monoculture era, anyone who wasn’t into the latest craze really had no choice but to wait it out while the music press, Top 40 radio, and MTV bombarded listeners with more of the same.

Now that we all have free Pandora, plenty of iPod storage, and the ability to share our Spotify playlists with all our social network friends, we can be as eclectic as we wanna be — but as it turns out, we’re still creatures of habit at heart. Much as we might like to brag about shuffle mode taking us from Anthrax to Coltrane to Britney Spears (post-ironically enjoyed, of course), deep down, we want to know which slot each of those artists fits into. When bands are genuinely eclectic, it scares us a little. We want to know, as Faith No More once shouted, “What is it?”

Enter Ashton Allen, Devin Moore, Emma Jean Branch, and Yara — a.k.a. Rabbit!, the resolutely adorable indie-pop quartet whose last full-length release, Connect the Dots, was a family favorite here at Dadnabbit HQ (my review is here). The band didn’t market the album as a “kids’ music” release, and as far as I knew, they weren’t a “kids’ music” band — which is why, the first time I listened to their new release, Go For It, I had no idea anything was different about Rabbit! this time around. (Dirty Dadnabbit secret: I tend not to read press releases.)

But something is different. And nothing is different, actually. Wait, let me explain: Without exactly seeming to mean to do it, Rabbit! has bounded into the kindiesphere with the same cheerful abandon that’s always made their music so sweetly addictive — and they’ve done it without really making a kids’ album at all. Where most artists court the family scene by adjusting their sound, Rabbit! has watched the scene come to them. These are songs equally enjoyable by toddlers, tweens, parents, and non-breeding indie-pop hipsters. It’s really pretty impressive, and I wanted to talk to Rabbit! co-founder Ashton Allen about the band’s journey. 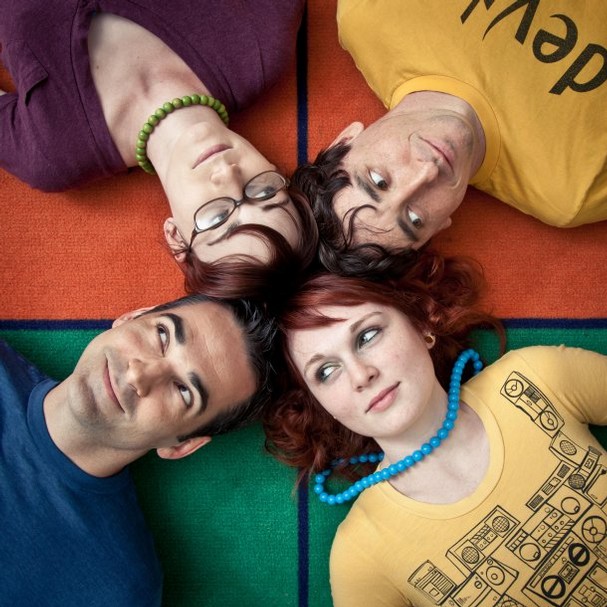 A lot of bands and artists present themselves as “fun for the whole family,” but Rabbit! blurs the line between “kids’ music” and “adult music” more willfully — and more thoroughly — than most.

Yeah, we didn’t set out to be a kids’ band. And I don’t know that we are a kids’ band, unless we’re a band for all ages of kids. I’d kind of liken it to when my dad used to watch Bugs Bunny cartoons or The Muppet Show with me — when I was a kid, I thought those shows were the coolest thing ever, but it wasn’t until I was an adult that I realized why he enjoyed them too.

I don’t know. Maybe when you write songs that are really positive, they’re for kids, more than they are for anyone who’s really jaded. [Chuckles]

I thought about Looney Tunes as I was listening to Go For It, actually, because of the way you guys slip so many inside music-geek jokes into your songs. There’s the Dylan rap in “Hide and Go Seek,” and the Beatles vocal riff in “New Day Sunshine,” the bit of “Jesu, Joy of Man’s Desiring” in the title track…

Yeah, there’s a number of references or homages throughout the record. More than anything, I think the sound we stumbled into is friendly to kids, but that surprised us as much as anyone when we started hearing it from people. We didn’t really know what the response was be, and the music was really nothing like anything Devin or I had ever done before. It was quite a positive departure.

You must be asked to define yourselves fairly often. Is it daunting at all to pursue this sort of boundary-free path you’ve been on?

It makes the music hard to describe, partly because Devin and I had backgrounds in making music that was more narcissistic, although I hate to use that word. Rabbit! has just been freeing, and I think the harshest feedback we’ve gotten so far was actually a compliment — one writer said he didn’t know what to do with the album. He described as “the anti-album.” [Laughs] I thought that was really cool.

Your background is in commercial music, right?

Our recent background, yeah. We got into it after we lost our record deals — when the Next Big Thing was labels going out of business. We looked at each other and said, “What do we do now? All we know is music.” So it became a way of staying in music while actually making a living. We’ve been really fortunate in that.

Between writing commercial music and playing to family audiences, you’ve embraced a pair of musical forms that have historically been sort of disregarded, even though they both rely on a strong level of craft that a lot of people don’t notice.

Well, for one, I live and work with one of the best songwriters I’ve ever met. I do my part, but I’m really fortunate to work with Devin — I’ve learned a lot just from being around him, and he always amazes me with what he comes up with. But also, you know, as labels started drying up, artists realized they needed new avenues for their music, and commercial work has become less, I don’t know, shunned or whatever. It’s just another way for people to discover you — and God forbid you actually get paid in the bargain.

I think it’s really neat. We don’t have a TV in the house, but any time I visit my folks, it isn’t more than two minutes before I hear something in a commercial that I like, and I’m using Shazam to find out who recorded it. It was a little scary at first when CD sales started dropping through the floor, but now I think we’re seeing a new musical renaissance of sorts. 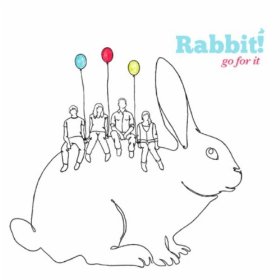 I want to talk about the tour Rabbit! just wrapped up in support of community-driven arts and music programs for kids. It sounds like it must have been an amazing experience.

Yeah, and I think we just scratched the surface of this issue. We knew we really didn’t know much about it, and we wanted to go out and learn about it before we did any sort of preaching — but in that Rabbit! way, we wanted to put a positive spin on it, too, so we went out with a videographer, and we’re currently editing the footage to create a presentation of what we found. And a lot of what we found turned out to be really great organizations and people who are presenting alternative options for kids affected by all these cuts in school arts programs. There are a lot of people out there who recognize that there’s a problem, and they’re taking it upon themselves to try and help.

Arts programs are crucial. Not to help kids become full-time musicians, but to help them become full-time people. Music and art is a big part of that, and with this tour, we wanted to shine a light on the people doing the work.

You played to a lot of all-ages crowds while you were out there, too.

Yeah, we did a number of traditional venues, but we also did a ton of non-traditional ones, from summer camps to house concerts to toy stores and ice cream shops. The traditional venues in the bigger cities were still a lot of fun, but it was funny, because as a band, those are the shows you tend to fixate on — and this time around, they ended up not meaning as much as the show where, for instance, we played to 80 families in this bar they opened up for us at 11 o’clock on a Sunday morning in Tucson, Arizona.

We came and gave out instruments to all the kids, and watching them light up when given the opportunity and the empowerment to make music of some sort was just a really cool thing to be a part of. It trumps being on stage at whatever cool venue in whatever cool town. It took me back to the reason I used to make music. You know, you say you do it for your fans, but you also get so much…glory out of being up on that stage. And these other shows weren’t really about us at all. It was nice. It beats someone coming up to you after the show and gushing about your performance. And don’t get me wrong, I’m still just as much of a sucker for that.

I know you’ve stressed that the Rabbit! journey hasn’t been mapped out, but I do think it illustrates a way forward for younger artists — it proves that you can finance and distribute your own music without having to fit it into a specific niche or genre.

It feels pretty cool to be a part of it. And it’s even cooler to feel like it’s bigger than me or Devin or Emma Jean or Yara. It’s an exciting time to be making music, and I think as long as we don’t try to fit any square pegs in any round holes, and we can keep making sure it’s fun, we’ll be ready for whatever comes next.