We’re big fans of Key Wilde and Mr. Clarke around here — I gave an enthusiastic thumbs up to their debut full-length, Rise and Shine, which has been in heavy rotation in our car for the last year and a half.

Key and Clarke are back with a new six-song EP, Hey Pepito!, which was all the excuse I needed to get Key on the phone for a conversation about their uniquely exuberant brand of children’s music. Read on — and then sample Pepito! via the widget at the bottom of the post.

First of all, I have to tell you that because of my son and his intense love of your music, I’ve had to hear “Rattling Can” at least once a week for over a year.

[Laughs] So you have just a little bit of resentment.

Not as much as I would if it happened with just about any other song.

Yeah! It could be worse. I’ve had parents tell me “Thank goodness I actually like this stuff, because otherwise, it would drive me crazy.”

One of the things I really love about your music is its vibrant, honest energy. Plenty of kids’ music is uptempo, but it often feels forced, or just hyper.

You know, I started in this field for two main reasons: One, I had a new daughter, and I wasn’t staying out until 2 AM anymore, and two, I just wanted to hear some cool kids’ music. People had already told us at different points in the past that we’d be good at making family music, and we realized that all we really had to do was take out the swear words and we were ready to go. END_OF_DOCUMENT_TOKEN_TO_BE_REPLACED

I hope you rested your voting finger yesterday, because after taking Sunday off, the 2011 KidVid Tournament resumes today with the epic battle of the Leadbelly Regional division, hosted by our friends at Gooney Bird Kids. If you thought making your picks was hard before, just wait until you get a load of today’s tournament hopefuls!

#1 Seed: Caspar Babypants, “$9.99”
The more I listen to Caspar Babypants, the more I love his music — whether he’s offering bouncily quirky takes on folk standards or deceptively simple originals, he’s one of the more original (and addictive) voices on the kindie scene. One of his biggest strengths is story songs, as evidenced by this tale of a ragged old teddy bear. Do you have some thread? 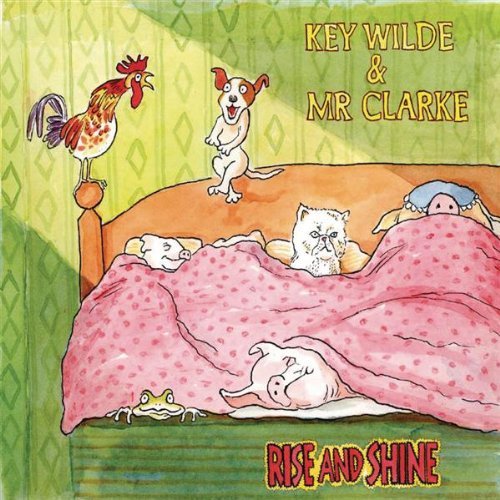 I’ve listened to more children’s albums than I can count, and I don’t think any of them have sounded less like a children’s album than Key Wilde and Mr. Clarke’s Rise and Shine. This isn’t a bad thing at all — in fact, each of these 10 songs is completely appropriate for children. It’s just that most kids’ music, no matter how skillfully or smartly it’s put together, sounds at least a little condescending — like adults trying to record songs kids will like — and Rise and Shine, in blessed contrast, comes across simply as a collection of music that ended up in the kids’ section through a series of happy accidents.

Again, this isn’t a matter of the subject material being over the little ones’ heads; Rise and Shine‘s songs deal with topics including pets, trucks, space travel, counting, and something called peekapoo. But Key Wilde and Mr. Clarke don’t pander with their arrangements, which are stripped-down, folk-flavored, and often totally rockin’ in the bargain — not to mention catchy, too. Rise and Shine is the kind of record you could listen to two or three times without realizing it was made with kids in mind.

Which is not to say the album lacks kid appeal; quite the contrary, as Rise and Shine is not only packed with ready-made favorites for the younger set (“Rattling Can,” which uses a brilliant, progressively lengthening “Old McDonald’s”-style chorus to describe the order of the universe, is at the top of my daughter’s list), but it comes bundled with a board book that illustrates many of the songs’ stories. The end result, as I can personally attest, is that your little ones will spend half an hour flipping through the book, completely mesmerized, while Key Wilde and Mr. Clarke entertain the whole family. Don’t go looking for Laurie Berkner levels of cuteness, but if your kids like a little genuine rock & roll in their musical diet, Rise and Shine is one to look for.