“How addictive?” you ask. Well, here’s the most recent example in our house: The new Caspar Babypants record, Sing Along!, arrived in my mailbox right before I left for a 10-day visit to my sister, who just had her first baby. By the time I returned home, my wife and kids had all memorized every line of the album — and my daughter had already serenaded her new cousin with a solo Flip cam rendition of the beautiful Sing Along! track “Crawl.” END_OF_DOCUMENT_TOKEN_TO_BE_REPLACED 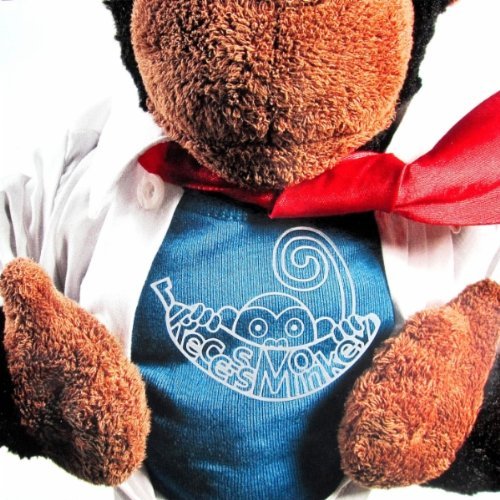 In the kindie world, there are few events more momentous than a new Recess Monkey record. The Seattle-based trio is set to return on June 21 with Flying!, a 14-song set that, per Monkey custom, follows a loose concept. This time around, the band was inspired by superheroes, which is fitting, seeing as how these stars of the junior set moonlight as teachers when they aren’t plugging into amps. (It’s like they have secret identities or something!)

If you don’t think the world needs more songs about Superman, not to worry — Flying! is about real-life heroism, the kind we see in our own families (“Grandmom’s House”), our friends (“Sidekick”), and even ourselves (“Bravest Kid in the World”). More importantly, the music is every bit as vibrant and joyously eclectic as fans have come to expect — and the band invited a few famous friends along for the ride, too.

To celebrate the new record, we lined up an interview with a pair of Monkeys: Jack Forman (bass, keys, vocals) and Drew Holloway (vocals, guitars, keys). Here’s what we discussed:

So let’s talk about the new album! The world is waiting with bated breath to hear new music from Recess Monkey.

Jack: And we’re waiting for them to hear it! Especially my wife, because there are several thousand copies in my basement. We can’t do laundry. [Laughter] It’s good that we seem to have some listeners, because otherwise, the inventory would start to take up some serious square footage. We still have CDs left over from our first band, and that was ten years ago.

You guys are impressively prolific. Was there any overlap between Flying! and your last album, The Final Funktier? And how did you settle on the superhero theme for this set?

Jack: Thematic thinking is something we learned teaching at the elementary school where we all met several years ago — every year, there’s a new curricular theme, and every level literally rewrites their curricula based on that theme, and each class looks drastically different than it did the year before. END_OF_DOCUMENT_TOKEN_TO_BE_REPLACED

The new century has seen plenty of ’90s rockers transition into new careers as family music artists, with some making the leap more unexpectedly than others. The one that’s made arguably the most sense — and yet been one of the most surprising — is Chris Ballew of Presidents of the United States of America, the power trio that made some of the most off-kilter power pop to grace the airwaves during the grunge/buzz bin era. At the time, PotUSA sounded like the latest flavor of winking, flannel-draped irony, but here’s the most ironic twist of all: they really meant it.

Now reborn for younger generations as Caspar Babypants, Ballew has been cranking out spare, thoughtful, goofy, and wonderfully addictive family music since way back in 2009, when he released his first album under the Babypants moniker. Given that he’s already released two more since then, it’s easy to see (and to hear) how gladly Ballew has taken to his new calling. We spoke with Chris recently to find out more about life as Caspar, talk to him about his artistic process, and get a few hints about what’s next for him. Here’s what we talked about.

Let’s start by talking about your approach to songwriting, especially as a parent. Do you consciously set aside time for writing, or do you just wait for inspiration to strike?

Well, I mostly go with the flow. I do set aside the time to tweak ideas. Right now, I have a song called “My Flea Has Dogs,” which came together because I was sitting in the kitchen playing something on the ukulele, and my wife just started singing those words. A lot of times, songs are born from moments like that — moments of inspiration or silliness.

One of the things that’s interesting to me about the Caspar Babypants records is how clearly the music represents an extension of the reductive approach you took with the Presidents. It seems like a big part of your process is stripping away non-essential elements.

Yeah, I like limitations. I feel like it focuses the songwriting to have musical limitations, because if you’re going to make a song sound good on a three-, two-, or even a one-string guitar, you’re creating something good enough to be played on pretty much anything. I guess I like leaning more on the melody and the content than the instruments. But that being said, the whole two- or three-string thing has become very special for me, and I can find voicings within that framework that I can’t do on a regular guitar, and it somehow subtly makes the music unique to the listener, whether they know it or not. I think it helps set it apart. END_OF_DOCUMENT_TOKEN_TO_BE_REPLACED