For those of you who live in more temperate climes, where winter is something you watch other people suffer through on TV, and snow is something you wish you had on Christmas, the idea of “spring fever” might seem like an old wives’ tale — like knuckle-cracking causing arthritis, or Karl Rove being the voice of Barney the Dinosaur. Speaking as a parent of two small children in the hills of New Hampshire, however, I can tell you it’s very much a real thing, and if someone happens to come up with something awesome for your kids to do on a beautiful spring day when their bodies are drunk with March sunlight, you may wish to throw a parade in their honor.

So far as I know, no one has ever thrown a parade for Bill Childs, the benevolent genius behind Spare the Rock, Spoil the Child. But I’m pretty sure someone will someday, because Bill is a veritable font of awesomeness, starting with the website I linked to a few words back, extending to his killer family-friendly radio show, and culminating with the series of super-sweet concerts he’s helped promote in the Northampton, MA area. For much of the year, you see, Bill brings artists to Northampton as part of the No Nap Happy Hour — and as if that weren’t enough, there’s the Meltdown, the (free!) festival that brings families and performers together for a whole day of music, activities, and good times.

All of which is a long way of saying my family and I made the 90-minute trek to Northampton last Saturday, where we melted down, and it was good.

Bill, to his immense credit, has been very patient about getting me to come out and see/cover one of his shows, but my youngest is two and a half, and until very recently, I’d sooner have towed a trailer full of rabid spider monkeys to Atlanta than risked three hours in the car and a napless day with my son. This year, though, we were so excited about the Meltdown that we lined up a whole caravan of friends and kids.

This year’s festival was held at the JFK Middle School, which I’d never set foot in and from which I had no idea what to expect. If someone had tried to hold a bunch of concerts in my old middle school, I can tell you that the only people who wouldn’t come away filled with sadness and regret would be the lawyers retained for a vigorous round of suings. But hey, this is Northampton, so I should have known that JFK would be a spacious, well-lit, brightly colored box of happiness — or at least it was on Saturday, when a few thousand people showed up to see a stacked lineup of kids’ performers, a circus, a goat, and more. (Yes, really. A goat.) It ran from 10-4, admission was free, parking was free, pretty much anything important was free. How? I don’t know. I think Yankee Candle and Comcast may own Bill’s children now, but I’m not certain.

Here’s my one caveat for the whole thing: When you stuff several thousand people, many of whom are knee-high or shorter, into a building with amplified music and a circus, the experience can be a little overwhelming — not only for smaller children, including my son, who was ALL DONE WITH THIS PLACE after about two hours, but for grown-ups like our friend Jamie, who ended lunch by cradling her head at a “cafetorium” table and looking at me plaintively. I was there more or less all day, and honestly, I felt a little carved out by the time we left — it’s just a lot to take in, all the time, although you can come and go whenever you like and there’s a “Chillout Room.” I can’t tell you anything about that room, or quite a bit of the day’s performers, because I was with my music-loving four and a half year old daughter most of the day, and she had her own very definite ideas of who we should see. Here’s what I can tell you: 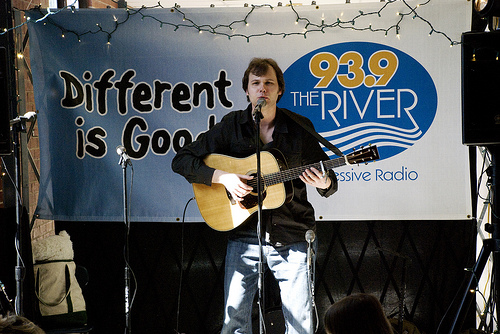 Alastair Moock, longtime veteran of the “dude with a grizzled but very likable voice and battered acoustic guitar” scene, was there plying his new CD, A Cow Says Moock. Alastair, who has the coolest name in all of kids’ music, was tucked away in what was charitably called “The Lounge Stage,” but which was actually an alcove across the hall from the gym/circus with gym mats on the floor. But for kids’ performers, it’s all about small — small listeners, small spaces (and ones that are, by and large, much cleaner than the small spaces played by “grown-up” singers), even small background singers standing rather defiantly in front of their tiny mikes and threatening to disrupt your performance. But Moock took it all in stride, delivering rousing originals alongside judiciously chosen covers (such as a dead-on take on “Fishin’ Blues”) and displaying some impressively deft crowd management skills in the bargain. I left his performance for a few minutes to check in on my kids, who were watching a belly dancer or something across the hall, and when I came back, the gym mats were covered with bouncing little people.

Rani Arbo and Daisy Mayhem, whose new album Ranky Tanky was recently (and rapturously) reviewed in this space, rolled onto the main stage at 1 PM, boasting an instrumental lineup that included fiddle, stand-up bass, and the world’s most wonderful drum kit — boxes, empty soup cans, and a suitcase doubling as a kick drum were all on display. The music was everything you’d hope for after reading that description: A fluid swirl of soulful, funky roots music and a set list that kept the crowd on its feet throughout boisterous originals and covers like “They All Ask’d for You” and “Purple People Eater.” I wanted them to play for two hours; I also wanted to hurl embarrassing compliments in the band’s direction after they finished their 35-minute set. Unfortunately (or fortunately, depending on how you look at it), I stayed trapped under my daughter as she sat on my lap waiting for… 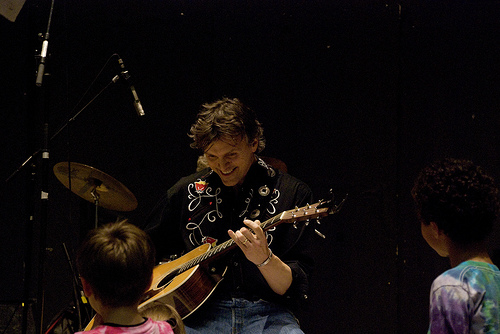 Uncle Rock, the alt-rock vet who took the hard lessons he learned in the trenches and used them to emerge victorious as a crown prince of kindie music. I had my first Uncle Rock experience reviewing his new CD, The Big Picture, last week, and I liked it — but watching him slay his pint-sized fans at the Meltdown, I completely understood his immense appeal. Prowling the stage, dancing around, exhorting the kids to follow a list of commands like a playground B.F. Skinner, Uncle Rock (or, as the New York Times would call him, “Mr. Rock”) came, saw, and conquered. (He also provided me with my only opportunity to see Dean Jones play when he brought Jones out to play trombone on a few songs.) Rock’s music is, well, more rock-oriented than most; his band interpolates bits of various grown-up bits in songs here and there, and they sprinkled the set list with covers like Buddy Holly’s “Everyday” and a transcendent version of “Love Train.”

The Flannery Brothers, who ended up with the somewhat thankless task of playing “The Lounge Stage” at 3 PM, but turned lemons into lemonade by working the crowd like they were playing Madison Square Garden. Dressed in bright colors and wedged into that tiny space, the Flannery Brothers proved they aren’t just a lot of fun on CD, but they’re an impressively tight live act, delivering note-perfect renditions of tracks like “Rutabaga” and “Best Pillow in the World” that brought an ear-to-ear grin to my tired face and reduced my daughter to giggling fits. (At one point, singer/tambourine rocker Dan Flannery sashayed down the gym mats and into the hall, prompting her to shout “He’s leaving!” in hysterics.) It was, in a word, marvelous, and I only hope the Flannerys end up on the main stage next year, because they’re stars just waiting to be connected with their audience.

Much to my regret, I missed Dog on Fleas and Ratboy Jr., but I’m only one man, and hey — that’s what next year is for. Mark March 26, 2011 on your calendars, and if you’re in the New England area, make the trip. What Bill and his colleagues are doing out here is wonderful, and it deserves to be supported.