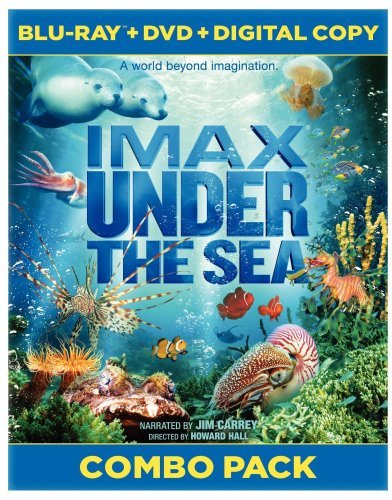 Director Howard Hall has plenty of experience working underwater — his previous films include Into the Deep, Island of the Sharks, and Deep Sea — and Under the Sea is every bit the visual treat you’d expect from someone with Hall’s résumé. His camera lingers over fish that don’t look like fish (hence my daughter’s early exclamation), fish that do unexpected stuff, and fish that are just plain fun to look at, with the pleasantly subdued Jim Carrey serving as narrator every step (stroke?) of the way. If you wanted to quibble, you could take issue with the inordinate amount of time the movie spends on the cuttlefish, but between its deadly tongue and its color-changing skin, there’s plenty of spectacle to go around.

Under the Sea is completely family-friendly, avoiding most of the honey-don’t-look death and violence intrinsic to most nature documentaries; aside from the cuttlefish dispatching its prey, about the worst thing that happens is a sea turtle chomping on a jellyfish. This isn’t a film that’s out to educate viewers about the circle of life — if it has a message, it’s more along the lines of “the sea is really neat, and we should be taking better care of it.” Who can argue with that?

On Blu-ray, Under the Sea is about as eye-popping as you could hope, so clear and vibrant you might swear you’re looking at at CGI creation, and the DTS-HD Master Audio 5.1 surround soundtrack, while it doesn’t exactly give your system a workout, offers a nice balance between Carrey’s narration, the (distractingly cutesy) sound effects, and the music. If you really wanted to find an axe to grind with this package, it’d be with the bonus materials, which consist of a glorified commercial for the film and a series of fairly dull webisode-style clips offering a behind-the-scenes glimpse of the expeditions. Sea is currently going for $26.99 at Amazon, and you can get a lot more bang for your buck on the Blu-ray market than a 40-minute movie with a few minutes of extras thrown in. In theaters, Under the Sea was shown in 3-D; perhaps the studio is waiting to unload the really good stuff for when 3-D televisions arrive later this year.