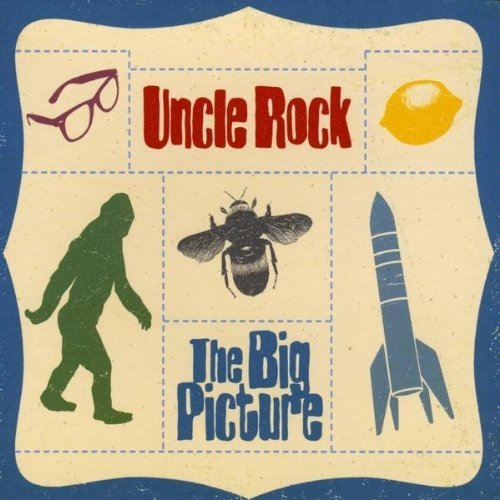 Now here’s an album that lives up to its title. The latest effort from Robert Burke Warren, a.k.a. Uncle Rock, further illustrates his gift for music that plays to kids without playing down to them — and addresses important topics in the bargain. Which isn’t to say The Big Picture is all serious: These 14 tracks touch on suitably kid-sized stuff like animals (“Leave the Bees Be,” “Sneaky Snake”), feelings (“Shake It Off!”), and mythical creatures (“My Friend Bigfoot”), and there’s even room for a song about a certain Texan rock legend’s distinctive singing style (“Buddy Holly’s Got the Hiccups”). But what really sets The Big Picture apart is the way Uncle Rock talks about the, um, big picture — like where garbage goes after we throw it away (“There Is No Away,” “Garbage Barge”), the importance of supporting your local economy (“Stop at a Mom n’ Pop”), and the bright side of a power outage (“The Night the Lights Went Out”).

Rock isn’t lecturing here, though. I mean, there really is no away, and as angry as the idea might make people of a certain political persuasion, it’s important for kids to recognize that their trash doesn’t just disappear after they put it in the garbage can. And whether or not you consider yourself a locavore, local economies are important — and I’ve never heard anyone make shopping from neighborhood stores sound like more fun than Uncle Rock does here. This kind of lefty stuff can be tricky; even the mighty Pete Seeger can seem didactic from time to time. But even at his most socially conscious, Uncle Rock doesn’t sound preachy; he just sounds like he’s sharing. This is partly because he couches his more educational tracks with silly bits like “Secret Spaceman,” but it’s also because his style is so refreshingly honest and direct. He doesn’t try to gussy up these topics in kids’ clothes, he addresses his audience with the faith and respect they deserve. It’s really sort of beautiful, if you think about it.

(Also beautiful, and definitely deserving special mention, is the production from Dean Jones, who’s becoming sort of the Joe Henry of the kids’ music world. Once upon a time, children’s albums were littered with awful synths and silly sound effects, and although this started changing before Jones came along, his name has become a real sign of quality — anytime you notice his involvement in an album, you know it’s worth your time, and The Big Picture is a perfect example.)