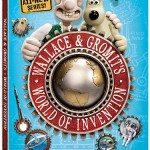 You remember Wallace & Gromit, right? Me? Honestly, I had forgotten about them. It’s been 7 years since the full length feature, The Curse of the Were-Rabbit. But as a casual fan, I was interested to see what the latest release from Wallace & Gromit brought to the table. Wallace & Gromit: World of Invention is the first new release since the Academy Award® nominated, A Matter of Loaf & Death from 2009.

The new DVD contains the entire six-part BBC ONE television series from 2010. The collection features Wallace & Gromit as hosts introducing segments on a number of educational topics. Each of the six episodes include six segments within them. This DVD is much less about Wallace & Gromit and more about the educational aspect. It’s as if Bert & Ernie hosted an episode of NOVA or Nature on PBS.

At over two and a half hours long, this DVD packs a lot of punch, for a very small price. It’s well worth it, no matter your child’s age. The collection is more geared towards children ages 6-10 years old. At the same time, my 3 year old was fascinated by the segments and was glued to the television the entire time. Trust me that never happens, especially for over two hours, on a single program.

Here’s a quick snippet on what to expect from this DVD: