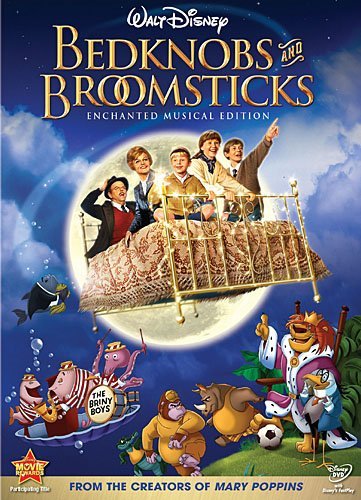 This latest iteration, which follows 25th and 30th anniversary reissues, is dubbed the “Enchanted Musical Edition,” and packs some new bonus content onto the expanded 25th-anniversary print, which added 20 minutes to the film itself. New buyers will now get a featurette entitled “The Wizards of Special Effects,” hosted by Jennifer Stone, an actress who just so happens to be one of the stars of the Disney Channel’s very popular Wizards of Waverly Place series. (Synergy!) You’ll also get a number of small features that look at the music of the film, footage from a recording session, and a deleted song, as well as theatrical trailers. The whole kit and caboodle retails for $30, but you can get it at Amazon for $17.99, which is a decent price for the package.

The movie itself, as you might recall, is a sort of silly, Disneyfied hybrid of The Sound of Music and Mary Poppins, in which three British children are placed in the reluctant care of an apprentice witch (Lansbury) during World War II. Even if you’ve never seen it, you know there will be songs, hammy acting, and squads of bumbling soldiers, and Broomsticks doesn’t disappoint on any front. But aside from the usual (and, it must be said, impeccable) musical routines, the movie also includes some state-of-the-art special effects, including some animation/live-action sequences, that were good enough to win an Oscar in their day (and still look pretty sharp now). I wasn’t exactly foaming at the mouth to watch this, and I doubt there are many people who consider it one of Disney’s finest, but all things considered, it’s really a pretty entertaining movie. I don’t think it benefits from the extra 20 minutes — it’s actually sort of slow in spots — but if you have a fondness for Silver Age live-action Disney, this will definitely hit the sweet spot.

Bedknobs and Broomsticks has been given yet another remastering for this edition, and it looks better than ever — which sort of says something unkind about Disney’s engineers, because it really wasn’t all that long ago that the last reissue came out, but there you go. The extra content is all well worth watching, too. If you already own a copy, I wouldn’t necessarily recommend going out and getting the “Enchanted Musical Edition,” but if you’re considering adding Broomsticks to your library, then this is certainly the version to own.