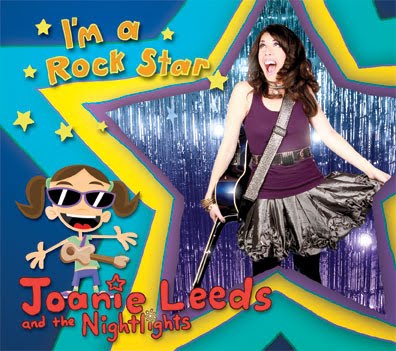 Do you remember listening to your favorite music as a kid, and imagining that you were the one singing those words in front of a screaming crowd? Joanie Leeds does — hence the title of her album I’m a Rock Star, which is not the presumptuous boast it may seem; in fact, it’s a wide-eyed look back at the musical excitement of youth, and it’s just the opening track of a solidly crafted, smartly arranged, wonderfully produced 13-track collection, all topped off with Leeds’ big, bright voice.

As you’d expect from an album credited to Joanie Leeds and the Nightlights, I’m a Rock Star will get the most mileage from younger listeners, but what sets Leeds apart from the pack is her way with a killer pop hook — songs like “Put a Smile on Your Face” are great for kids, but more importantly, they’re just plain catchy — as well as the sense of humor that makes silly cuts like “I Was an Elf” worth repeat listens. And then there’s “Give Me a Hug,” which is a bona fide pop jewel. Like a lot of kindie performers, Leeds tried her hand at adult pop before migrating youthward, but unlike many of her peers, she never comes across as condescending; you get the sense she’s just a songwriter who loves kids, and that — along with her relative restraint when it comes to sugar-frosting her uptempo numbers with unnecessary silliness — makes Rock Star worth a spin for the whole family.