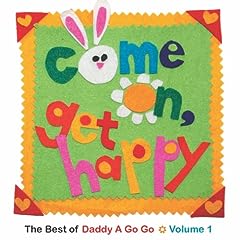 I’m glad I didn’t, because Come On, Get Happy is really pretty charming. My friend the Lovely Mrs. Davis has designated Boydston a member of the “goofy dads” genre, which is true, I guess, except that I find Daddy a Go Go a lot less goofy than much of the kids’ music I listen to. And really, pretty much the entire genre is goofy — some of it is obnoxiously overt, and some of it is less caffeinated, but I don’t think I’ve listened to a single children’s album that didn’t make liberal use of cornball humor. In that context, Come On, Get Happy is really pretty sedate; musically, I’d liken it more to NRBQ than most children’s music (and yes, I’m aware that the Q has released a kids’ record). Given that I’m a huge NRBQ fan, it should come as no surprise that I really enjoyed most of these songs (notable, unsurprising exception: “Pink Floyd Saves Hugh Manatee”) — they have the pleasantly lo-fi production aesthetic of a lot of the great old indie rock records of the ’80s, which is weird, given that Boydston didn’t start recording them until the ’90s, but whatever. The album also highlights Boydston’s taste in covers, which ranges from the obvious (the title track) to the wonderfully semi-obscure (Harry Nilsson’s “Best Friend”).

Daddy a Go Go isn’t for everyone; my wife, for instance, hated Come On, Get Happy. But if you’re anything like me, and you find yourself having to stomach an awful lot of sugar with your kids’ music, these songs may be just the slightly rockin’ relief you seek. Check out this video for “School Bus Driver (The Stop Song)” — not, incidentally, on Come On, Get Happy — and then hear clips from the album at the purchase link above.