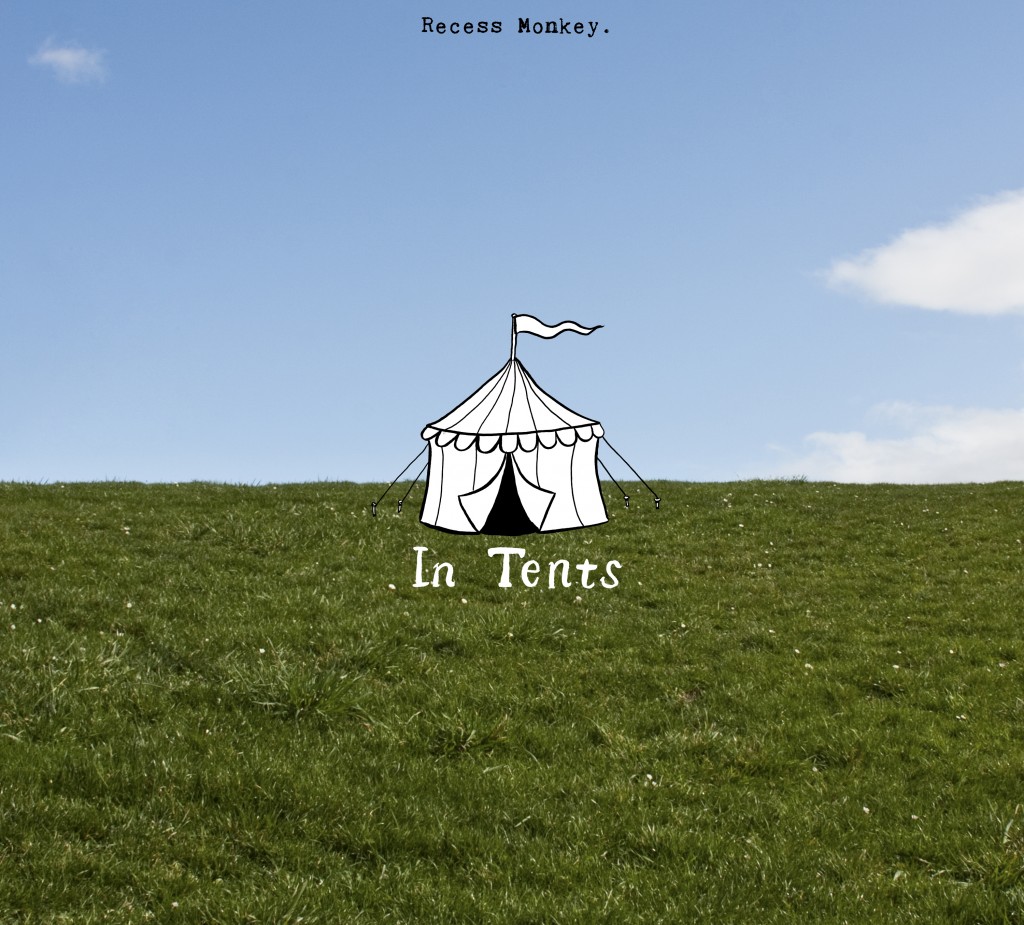 Just like the seasons, every year seems to bring another release from Seattle’s Recess Monkey.  2012 is no different. June 19th will mark the release of the eighth studio album from the trio. In Tents finds the band exploring the world of the circus. In addition, the group brought in Dean Jones to help produce the record.

I interrupted Monkey Jack Forman as he was editing the video for ‘Popcorn’ which can be found right here. He’s obviously quicker at editing videos than I am at transcribing interviews.

Will you ever take a break? In Tents is your eighth album in eight years.

We’re so lucky that everything is line for us to keep us inspired. We keep wanting to do this. Even though I’m not teaching at school this year while I’m watching my son, I’m still surrounded by children. I go back to the school all the time. The kids are at our shows. Drew and Daron are working in the trenches with the kids in their classroom. It feels like every day you’re with kids, if you could transcribe it, that would be a record or more. If you could spend and transcribe an entire day with kids, you’d probably have a career’s worth of material. Plus having memories of being young from our own childhood. There is just such a richness of material that is available. We’ve never gotten tired of it.

Has there ever been the thought of taking a year off?

I could see us taking a break if it ever felt like work. But it still feels like we’re playing. Sunny days in Seattle are rare from October thru February, so it’s a perfect time to hunker down and be creative. It never feels like a grind. It’s almost like a hobby. But we do it often enough it could certainly be described like a job, but it doesn’t feel like it.

With the kids offering up so many ideas for inspiration, how do you focus in on a certain theme?

We always start with the theme and go from there. You know, as teachers we’re trained to always listen.  You never know what to expect from the kids. We know how to focus on what kids are going to bring to you that day, instead of what you bring to the kids. I think being open to all ideas is helpful. As teachers we plan out a years’ worth of curriculum for the kids, that trains us to listen in certain ways. When you’re seeing a day at school through the eyes of a circus, it’s funny how things you wouldn’t expect, pop to the surface that work.  It’s a great way to tap into the kids subconscious without trying to force the issue. By us thinking of a specific theme it allows us to really weave ideas together.

Now that you’re on your 8th album, have you figured out what you’re doing?

Never. No way. The process of releasing  a new record is just as nerve wracking and frightening to us as it was when we released our first record. There comes a point where you just have to let go and let people listen. Whether they like it or hate it, that tight rope (pardon the circus pun) is what pushes us.  I think if we ever felt comfortable, we’d lose our edge. We’re always trying to force ourselves into new areas and grow creatively.

Dean Jones was brought to the table on this record:

He was amazing. Now Drew is our primary songwriter and that part of the process was pretty similar. After we thought of the theme and brainstorm ideas for songs, we hand it over to him. Drew’s just so prolific in his song writing, he goes into the cave and comes out a couple weeks later with these amazing demos for songs. But bringing in Dean on that was such a learning experience. He’s just a different creative being. We’d send him some demos and he’d just take the songs to a place we hadn’t thought of. The beautiful part about Dean is that he is such an amazingly talent musician, but he’s not pretentious about it. He comes in with full humility and just a genuine desire to have really satisfying creative experience. That’s the kind of person you want to work with. It was a really fun time where no one wasn’t doing anything but smiling during the process. Dean would at first throw us what felt like curve ball, then we’d try it and suddenly it would make sense. I can’t speak highly enough about the experience.

How has the kids music scene changed since your first album?

We came into it as teachers, first and foremost, who were also musicians toughing it out in the Seattle indie music scene. It was very incongruous to be doing it when you’re at show until 2am and then going in trying to teach the next morning. It was our circumstances that led us to the Kindie scene. The first year or two was a learning experience for us. We learned a lot from Stefan Shepherd at Zooglobble about what other artists were doing. We slowly learned that there was a full fledged scene for kids music. It has grown so much since we started.

So how does it feel to be considered a veteran of the kids music scene?

(laughs) It’s a really gratifying experience, but we still feel like the new kids on the block. We’re still learning as we go. We look to other artists to see what they’re doing. What they’re doing to get the kids to relate to the live experience. It’s been really cool to sit back and realize we’ve figured some things out. We share those things as freely as we can.

Has the Kindie  genre gotten to the point of allowing artists to be financially successful?

Well, we’re teachers. So we don’t try to do things that are going to make us wealthy. But we’re at the point now where I can work full-time for the band while I stay home with my son. Not a whole lot of kids musicians can say that. We’re just scraping by, it’s not like we’re this huge industry. Over the years we’ve learned how to book shows and do what we can to sell CDs. Video is big part of it. It’s fun to tell stories that way in addition to just songs. I don’t know how other bands operate, but we’re still very much a month-to-month, coat hangers and duct tape operation. We’re still trying to figure out as we go.

Booking shows is big source of revenue for adult bands/musicians.  How do you convince venues to book kids shows when the venue won’t be getting bar revenue?

Well kids don’t drink nearly enough beer, so that really hurts our cause. The joke is, we still play shows at 11, they are just at 11am not 11pm. Kids audiences are so much more fun than drunken ones. Jammin’ Java in DC is a venue that does a great job of building an audience by having shows on a regular basis. For most venues here in Seattle it comes down to liquor license. Ordinances just don’t allow for all ages shows that have access to bars in them. City government is a great place to book gigs, via their summer festivals. Libraries are still a good place to book shows too. The model of doing door splits and having clubs ask “What’s your draw?” is tough.  It is sort of nice when you can side step that all together and do shows that are more family friendly. It doesn’t frustrate us when we don’t have to deal with those questions.

As a whole, is the Kindie scene adding more credibility by the addition of bands that had success in the adult world?

The Verve Pipe are friends of ours and we helped them out with a show out here in Seattle.  Chris Ballew is another example. Honestly, I don’t know if it builds other bands audiences, but it raises awareness of the genre. It helps take away the stigma. I think anyone who makes quality music for kids helps the genre. We’re all in this together. It will be fun to see in the coming years how the genre grows with the addition of established adult bands being added into the mix.  It helps with the credibility to the genre. Kids music is unique in that it’s open to all different styles of music.