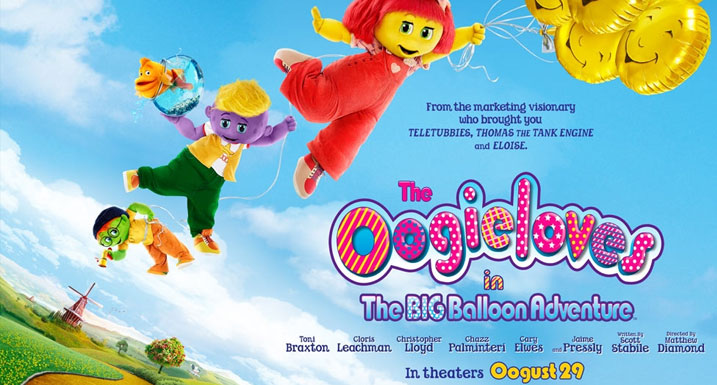 If you were a studio publicity flack and you were consciously setting out to create a movie poster that would send a shiver of terror down the spine of every single parent I know, you could hardly come up with a better tagline than “Brought to you by the marketing visionary who brought you Teletubbies, Thomas the Tank Engine, and Eloise.” Not that those shows are terrible, necessarily; in fact, they’re often very good at what they do. But I don’t know anyone who’s asking for more of them — or who’s actively soliciting the input of marketing visionaries when looking for family entertainment.

Ladies and gentlemen, we are gathered here today to discuss The Oogieloves, which sounds like something an old lady gives her cat when she’s feeling lonely but is actually an upcoming film from — you guessed it — producer Kenn Viselman, the guy who ported Teletubbies and Thomas over to American TV. At first glance, the Oogieloves appear to be your standard candy-colored nightmare — on the poster, it looks like the yellow one is being carried away by balloons after shaking off the purple and green ones, who are plummeting to their death and taking out a goldfish in the bargain — but Viselman has a special flavor of hell planned for you.

In the Hollywood Reporter’s remarkably restrained profile on the project, Viselman says he was inspired by a trip to the theater for a Tyler Perry movie, during which he noticed that black people like to yell at the screen. (Hey, don’t look at me like that — I’m just telling you what he said.) After hearing about the midnight screening experience at Rocky Horror Picture Show from a friend, Viselman had a eureka moment that “solved” a “problem” he’d been having with Teletubbies creator Anne Wood, who wouldn’t let him turn the show into a movie:

For years, I thought about how can I win an argument with her to say, see this is why we should make a movie. And that turned into me kind of deconstructing the entire movie-going experience. Why would a child not be happy in a movie theater? Eventually, what it really breaks down to in really simple terms is that young kids are asked to be adults when they go into the movie theater. They’re asked to go there and be quiet, don’t talk, eat your popcorn and drink your soda and just be quiet. That’s not the way children interact.

Do you see where Viselman is going with this? I think you probably do. And truthfully, while the idea of being in a movie theater with dozens of screaming kids makes me want to vomit, it isn’t really the “interactive” idea behind The Oogieloves that I find so repulsive — it’s Viselman’s utter lack of compunction when it comes to admitting that the whole dumb thing was reverse-engineered from the idea that kids need to make noise while they watch movies. Instead of happening upon a story that might have been improved with audience interaction, he worked backwards from the question “What can I do to exploit the under-5 demographic?” — and then had himself billed as a marketing visionary on the poster, thus hammering home the sad reality that this is the way a lot of people approach children’s entertainment, and it’s so commonplace that you’re not supposed to think twice about it.

I just got that what we need to do is allow children to be children, allow them to behave the way they would behave. And so if we created a film that allowed for that, that actually embraced it and encouraged it, we would have an incredibly different experience — not only would it be a different experience on the screen, but it would be a much more successful experience on the shelf. Because you can bond with these characters in a way that you can’t bond in another film, because now they’re your friends, now they’re asking for your help. We break the fourth wall down — we use auditory and visual cues to tell kids when to stand up and sit down. Literally, they are the catalyst for the adventure. And it changes the whole experience.

Viselman isn’t necessarily wrong about creating a different experience, but any parent knows it can be tough to teach kids about context-specific behavior, and I cringe at the notion that what we really need to do is encourage them to act out in an environment where people are usually supposed to be quiet and respectful of their fellow filmgoers. If what Viselman really wanted to do was change his audience’s “experience,” he could easily have left The Oogieloves on the home video market, but that isn’t what this is about — it’s about presenting your local cinema as a more affordable alternative to, I don’t know, Blue’s Clues Live. (Or Miley Cyrus concerts, which Viselman bizarrely references for some reason.) Or, if you want to be more cynical, it’s about selling more of that popcorn and soda to a younger crowd.

The whole thing gives me the heebie-jeebies, to say nothing of the characters’ stupid names (to quote THR, “Christopher Lloyd voices Lero Sombrero, Cary Elwes voices Bobby Wobbly, Cloris Leachman is behind Dotty Rounder, Chazz Palminteri is Marvin Milkshake and Toni Braxton is Rosalie Rosebud”) and Viselman’s plans to roll out a line of “plush, bendable action figures.” It’s all very crass and cynical, and to my eyes, it represents everything that created a need for kindie culture in the first place. Have a look at the trailer and see how long it takes your skin to start crawling: