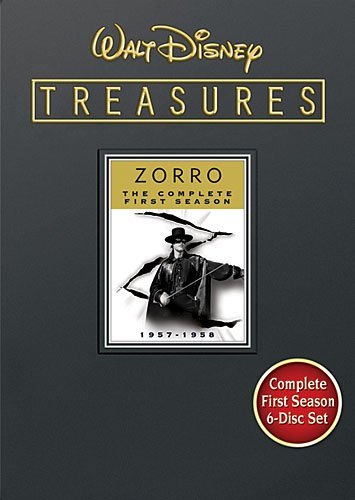 Nostalgia is a tough sell when it comes to today’s children. With 21st century kids used to quick, Michael Bay-paced edits and brilliant, flashing colors to keep their attention, sitting them down to watch a black and white television series from 50 years ago may seem like a lost cause. With the release of Zorro the Complete First Season and the Complete Second Season in deluxe DVD format, Disney is showing the utmost confidence that this adventure series will delight not only the diehard Disney fanatics, but future generations of TV watchers. Trust me when I tell you that if you sit down with your son or daughter to watch Zorro, they’ll love it, and you’ll find your inner kid bursting with enthusiasm.

When Walt Disney decided to produce his first primetime series, he went all out to ensure that what he was airing met the high standards he set for his studio, both in motion pictures and television. He smartly chose to adapt the pulp novels of Johnston McCulley and partly based his vision of the masked avenger on the wildly successful silent film starring Douglas Fairbanks.  The Fairbanks version of the hero was a lighthearted take, adding humor and charm mixed with swordplay and spectacular stunts. Disney hired top writers to produce the show, he built an elaborate, permanent set on the Disney lot, and he brought together a cast of talented character actors to bring to life the colorful characters he envisioned. In the role of Don Diego/Zorro, an unknown actor named Guy Williams was cast. While this may have seemed like a risk, the actor exuded charisma as the masked avenger out to defend the oppressed. Moreover, Williams had an everyman, relatable quality that draws you in and keeps you entertained. And entertained you will be. END_OF_DOCUMENT_TOKEN_TO_BE_REPLACED