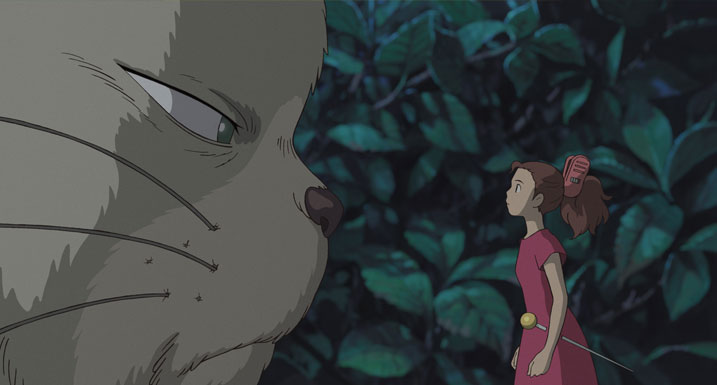 We love us some Studio Ghibli around here, and we’ve been waiting with bated breath for their latest offering, The Secret World of Arrietty, to make it to these shores. For awhile, it seemed like Disney was going to pass on an American release for Arrietty, leaving fans to import UK Blu-rays, but they’ve come to their senses: it’ll arrive in a theater near you on February 17, 2012.

Residing quietly beneath the floorboards are little people who live undetected in a secret world to be discovered, where the smallest may stand tallest of all. From the legendary Studio Ghibli (Spirited Away, Ponyo) comes The Secret World of Arrietty, an animated adventure based on Mary Norton’s acclaimed children’s book series The Borrowers.

Arrietty (voice of Bridgit Mendler), a tiny, but tenacious 14-year-old, lives with her parents (voices of Will Arnett and Amy Poehler) in the recesses of a suburban garden home, unbeknownst to the homeowner and her housekeeper (voice of Carol Burnett). Like all little people, Arrietty (AIR-ee-ett-ee) remains hidden from view, except during occasional covert ventures beyond the floorboards to “borrow” scrap supplies like sugar cubes from her human hosts. But when 12-year-old Shawn (voice of David Henrie), a human boy who comes to stay in the home, discovers his mysterious housemate one evening, a secret friendship blossoms. If discovered, their relationship could drive Arrietty’s family from the home and straight into danger. The English language version of The Secret World of Arrietty was executive produced by Kathleen Kennedy and Frank Marshall, and directed by Gary Rydstrom.

If you’ve never watched a Miyazaki film, it’s probably important to note that while not all of his movies are appropriate for young children, they’re all childlike in some way; he tends to favor young protagonists, for one thing, and then there’s the matter of his endlessly inventive cast of supporting creature characters. Watching a Miyazaki movie, you’re never sure whether you’re seeing the jaw-droppingly beautiful work of an unbridled genius or just the byproduct of an awful lot of drugs. Either way, they’re all enjoyable — all classics in their own way. Now, on top of getting Ponyo on Blu-ray, consumers can own expanded versions of Castle in the Sky (1986), My Neighbor Totoro (1988), and Kiki’s Delivery Service (1989). END_OF_DOCUMENT_TOKEN_TO_BE_REPLACED