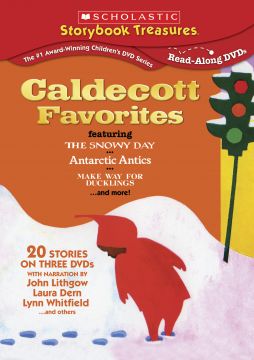 There are so many Scholastic Storybook Treasures releases that you need a special shelf (or three) just to hold them all, which makes it something of a challenge to review them as they come out — but release schedules be damned, this is one product lineup that deserves your attention, no matter how massive it gets. These three titles are the latest Treasures to grace the Scholastic Storybook lineup: 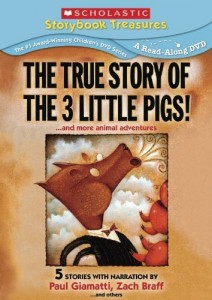 The True Story of the 3 Little Pigs! … and More Animal Adventures, featuring five stories and a handful of extras. The extras are more for parents — your kids probably aren’t going to sit still for interviews with the author and illustrator of The True Story of the 3 Little Pigs! — but the main feature includes about an hour’s worth of dependably entertaining stuff. The headliner is Jon Scieszka and Lane Smith’s 1989 favorite, which gives the wolf’s perspective of the classic tale; here, it’s narrated by the suitably wolfish Paul Giamatti.

Batting second is the Zach Braff-narrated Wallace’s Lists, adapted from the Barbara Bottner/Gerald Kruglik/Olof Landstrom book about a mildly OCD mouse whose need for lists is challenged by a new friend; rounding out the disc are animated versions of Helme Heine’s The Pig’s Wedding, D.B. Johnson’s Henry Builds a Cabin, and Simms Taback’s This Is the House That Jack Built. They’re all fine stories, loosely connected by theme, and offering the same blend of entertainment and education (the box says this title supports “early reading, problem solving, and friendship,” if you’re worried about that sort of thing), and for less than $15, it’s a worthy addition to your rainy-day DVD stash. END_OF_DOCUMENT_TOKEN_TO_BE_REPLACED 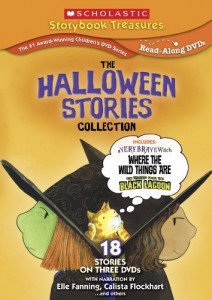 They’ve put together so many collections that I can’t believe they still have any new ones left to release, but if there’s a series that deserves infinite installments, it’s Scholastic Storybook Treasures — and there they go again, with a three-hour-plus bundle of 18 creepy (not really), crawly (maybe a little) stories celebrating the Halloween season. Perfect for teachers looking for a classroom treat, parents of trick-or-treating youngsters, or kids who get a kick out of seeing their favorite books come to (occasionally somewhat limited) life onscreen, The Halloween Stories Collection is good, clean seasonal fun — and at under $12.50 at Amazon, it’s priced to sell, too.

Synopsis: 18 not-so-scary stories in a 3 DVD collection. From the kid-friendly Halloween stories A Very Brave Witch and By the Light of the Halloween Moon, to family favorites The Teacher From the Black Lagoon and Where the Wild Things Are, kids and parents delight watching their favorite books spring to life on DVD.

Where the Wild Things Are
In the Night Kitchen
Alligators All Around
One Was Johnny
Chicken Soup with Rice
Pierre
A Very Brave Witch
By the Light of the Halloween Moon
A Dark, Dark Tale
Georgie
The Witch in the Cherry Tree
The Three-Legged Cat
The Three Robbers
Little Tim and the Brave Sea Captain END_OF_DOCUMENT_TOKEN_TO_BE_REPLACED