Well, it’s about damn time we started to hear the first fruits of Ratboy Jr.‘s labor on their long-awaited second LP — and to sweeten the deal a little (okay, a lot), they’ve added Dog on Fleas to the mix for their new single, “Backyard Camping.”

But wait, it gets better: Unlike last weekend, when the band was passing out Brooklyn-certified cassettes of the song at KindieFest, this week finds them joining the digital age and sharing “Camping” in good old-fashioned mp3 form. Enjoy it below, and keep your fingers crossed for a new full-length soon:

I’ll be writing about the grown-up artists at Popdose later, but here’s a brief rundown of my Meltdown experience: END_OF_DOCUMENT_TOKEN_TO_BE_REPLACED 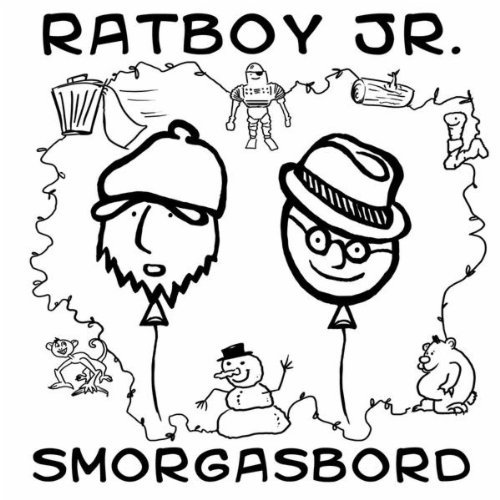 They’re called Ratboy Jr., their album comes in a brown sleeve made out of 100% recycled paper, and its second track includes the words “everything is wonderful, including the dirt.” I probably don’t need to tell you what kind of music to expect from Smorgasbord, but just in case you’re still unclear, I’ll spell it out for you: Don’t expect a lot of studio polish, and if you’re the type of parent who’d rather see your kid at Gymboree than splashing in the mud, or if you greet things like composting with an eyeroll, then you should probably stick with your Laurie Berkner CDs.

But if you like wild and woolly funky folk, feel free to dive face-first into Ratboy Jr.’s Smorgasbord‘s 15 tracks of fun. Charmingly ragged harmonies, warm brass, and a slightly jammy aesthetic all add up to a wonderfully down-to-earth listening experience that manages to feel as expansive as any Phish record while keeping every song under four minutes. The songs have a decidedly eco-friendly tilt (“Worms,” “Dirt,” “Living in the Trees”), but they treat the benefits of natural living as an implicit matter of course rather than something that needs to be taught. It’s just a fun time, man, and as a dad who appreciates a nice rootsy recording, I hope Ratboy Jr. brings us back to the table for many more helpings of polish-free pleasure. Everything is wonderful, indeed.