We’ve had a lot of fun at Putumayo’s expense around these parts, but it’s all been in good fun — even though they seem to have a release for every culture, mood, or occasion, they also have an undeniable knack for putting together some pretty great mixtapes. Their latest, Putumayo Presents African Blues, is no exception; it mixes low-down laments with the sprightlier side of the spectrum, instrumentals alongside vocal cuts, and offers a musical African travelogue in the bargain.

But don’t take our word for it — listen below, and pre-order your copy now. Putumayo Presents African Blues is out April 24.

I’ve teased them in the past for their prolific release schedule, but the Putumayo Kids label does some of the most consistently impressive work on the kindie market — in an era when plenty of Americans can’t find New Jersey on a map, let alone Ecuador or Uganda, the Putumayo releases take listeners on effortlessly enjoyable global journeys. And while they’re edifying and entertaining, they’re also contributing to charities like Amnesty International, which is getting 50 cents from the sale of each copy of the latest Putumayo release, Kids World Party .

To celebrate the new album (out June 28) and find out more about the company, we scheduled time for a talk with Putumayo’s founder, Dan Storper. Here’s what we discussed.

I’d like to begin by talking about Putumayo and Putumayo Kids. What’s the company’s mission, especially as it relates to kids’ music?

Well, let me go back a little bit. I started the label as a result of a few happy accidents, one of which was walking into one of our retail stores back in ’91 and hearing some really trashy metal music that I didn’t think was appropriate. That led me to search out international music, and I found all of these great artists I’d never heard of, which I compiled into a tape for our stores. And on the day the tapes arrived, I got multiple calls from managers telling me that customers were flipping out over the music — to the extent that people couldn’t get their jobs done, because they were fielding so many questions about it.

Through a group I was a member of, called the Social Venture Network, I met the owner of Rhino Records, and it struck me that we were looking at an opportunity to create thematic collections of music from around the world. So I proposed the idea to them — we’d collect the songs, they’d do the licensing, manufacturing, and distribution. It started from that, and kind of evolved into something that really led me out of the rat race of the clothing business. END_OF_DOCUMENT_TOKEN_TO_BE_REPLACED 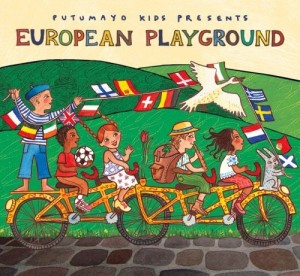