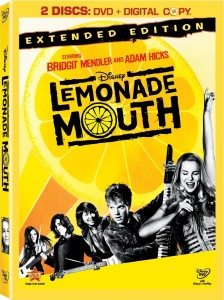 I’ve seen my share of made for TV Disney films over the past eight years to tell the good from the bad, the craptastic from the sublime. Lemonade Mouth, which aired this past spring and has just been released on this two disc DVD combo pack, ranks as one of the best that the mouse house has produced. A great script; fine acting by the film’s young cast; and most of all, songs you won’t mind hearing over and over again when your kids buy the soundtrack, because they will want to buy the soundtrack. But that’s okay. The songs from Lemonade Mouth had the exact mix of inspiration and pop drive to make to make it perfect for accompanying this summer’s family road trips and pool parties. END_OF_DOCUMENT_TOKEN_TO_BE_REPLACED