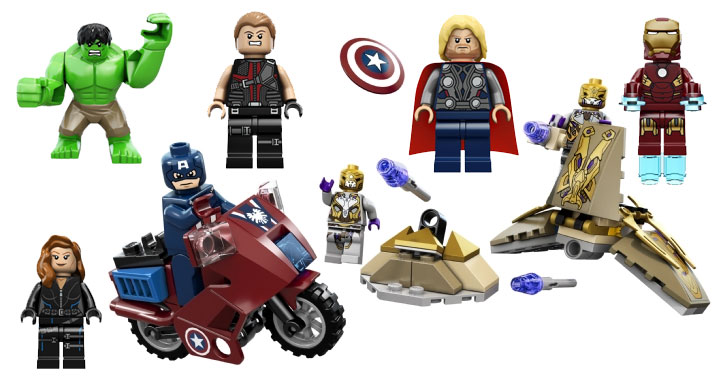 Continuing what seems like this week’s theme of “new offerings from the product lines of overly licensed properties,” LEGO has released shots of its new Avengers sets, timed to invade store shelves in tandem with the Marvel blockbuster on May 4.

I pooh-poohed movie tie-in hysteria in my Lorax post, but that was partly because A) the ads people seem to be most upset about aren’t super kid-targeted, and B) the movie has a message that I think is worth taking a few extra steps to spread, even if doing so requires things that seem counteractive to the message itself. The Avengers, on the other hand, isn’t about anything other than blowing stuff up — and although Avengers director Joss Whedon is a nerd king who could very well do right by the franchise, the movie’s trailers suggest it’s just more of the same CGI and loud explosions we line up for every summer, and these LEGO sets are designed purely to make kids beg their parents for new toys.

All of which is part of the price of procreating in a mass media society. But these are the product tie-ins that ring the hollowest for me. Typing about this stuff makes me feel like I need to wash my hands, especially given LEGO’s nobler origins. I know a lot of people who loathe the rather patronizing “LEGO Friends” product line, but if I could start tearing pages out of the company catalog, I’d start with stuff like this.

Take a look at full-size shots of the figures (including what might be your first good look at the movie’s villains, albeit in block form) over at Empire.