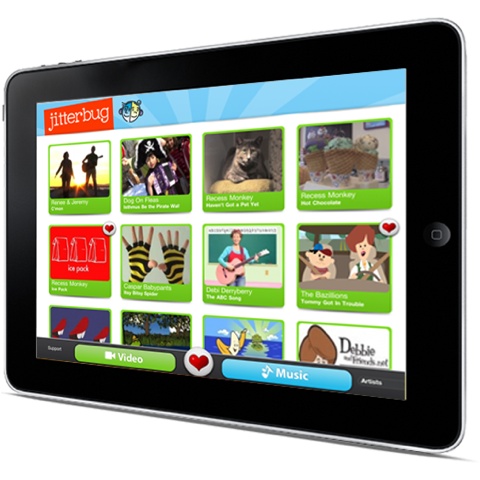 Kindie culture is a burgeoning movement, but one of the most refreshing things about the scene — the lack of corporate machinery whirring around it — also works against efforts to raise awareness of the work. Unless you’re a devotee, it’s easy to remain unaware of some really terrific stuff. Hell, I spend a fair amount of time covering it, and I’m constantly finding out about artists I’ve never heard of. The commercially diffuse structure of the genre keeps the suits from taking over and ruining everything, but it’s also sort of a problem.

One of the things that’s missing is the sort of third-party curation that usually comes with the maturation of a medium, which is one of the reasons why it’s interesting to note the arrival of Jitterbug.tv, a Web service and iPad app that aims to guide parents into a sort of walled garden of family-friendly nirvana. (Not Nirvana. Those guys aren’t allowed.)

What Jitterbug does, in surface terms, is collect music and music videos for kids, and plug them into a bright, easily navigable central space where they can be seen and enjoyed. It’s basically YouTube/Spotify for the younger set. The concept isn’t exactly new, but Jitterbug adds a couple of twists: One, they focus on independent artists who aren’t getting a lot of push from other family content portals, and two, they’re charging a monthly fee in order to pay the artists royalties.

Those are crucial points. If Jitterbug is successful — and that’s a big if — it could go a fair way toward helping kindie artists monetize their art. I don’t envy the company in its quest to find a suitable price point for the service, but if they can figure out a way to really show people what they’re trying to do, I think there’s a real market for Jitterbug.

The hangup is actually getting people to pay for it. Jitterbug follows a similar service, MyKazooTV, with a free model and a more heavily guided structure. At MyKazooTV, videos start playing as soon as you navigate to the site, rather than waiting for you to choose — a different and obviously in no way better or worse approach, but as most parents will probably say, “Hey, it’s free.”

I don’t mean to insult free — I like free — but as a model for driving creation, it kind of sucks. Which is why, despite experiencing some bumps in the road with somewhat buggy early versions of the Jitterbug app, I hope it catches on. I can vouch for at least one six-year-old girl who adores the app, much to her Coco Loco-loving younger brother’s chagrin; for her, it’s endlessly fun and fascinating to watch her favorite artists act out their musical adventures in clips for songs she knows by heart. I already curate my kids’ cultural experience pretty heavily, but if I were feeling a little lost in my search for family-friendly music, I’d definitely consider ponying up for a monthly Jitterbug account.

How much is it worth? Again, that’s hard to say. Jitterbug faces an uphill fight — as consumers, we’re already saturated with subscription-model entertainment, from the stupid cable bill to more affordable services like Netflix and Spotify. I think what the company might need to do is develop a freemium model a la Daytrotter, where ordinary users have access to a certain amount of content, but the really good stuff is locked away — and the key is stupidly affordable. Unfortunately, a lot of parents don’t think kids’ entertainment is worth paying for and/or aren’t particularly worried about the quality, which can’t help but marginalize the commercial prospects of independent artists who are actively trying to elevate the medium. It’s a catch-22, and so far, no one’s really been able to solve it. Services like this one could be part of the answer.

Tired of listening to your kids’ same old CDs over and over again? Jitterbug is here to help! The site seems to be in something like beta right now, with just a handful of artists available, but the premise is awfully cool. In the site’s words: “Discover great independent music for kids. we hand pick the good stuff…you won’t find Barney here.”

It’s a sentiment I can’t argue with, certainly, and I can personally vouch for Jitterbug’s appeal to one particular three-year-old who told me, after watching one video, “I love this site.”

What would be nice is the ability to stream a Jitterbug radio station, or download a Jitterbug podcast — hand-picked content aside, the site is essentially just acting as a portal for embedded content that seems to be mainly hosted elsewhere. Once Jitterbug gets its legs, hopefully they’ll add some of the extra functionality that will help turn them from a video gateway into a must-visit site for the “hip kids” they’re targeting in their manifesto.