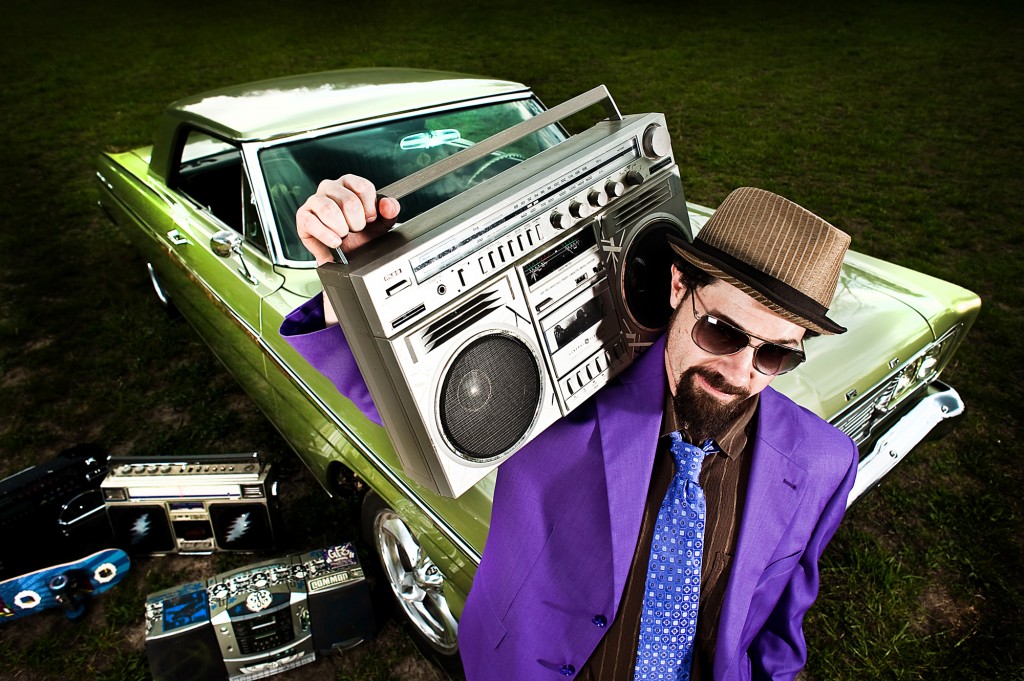 The undisputed King of Kid-Hop is back with arguably his strongest album to date: Make Believers is a genre-bending retro radio party.

I talked to Mr. Skidoo while getting his hair cut prior to a CD release show in Ashville, NC this past Sunday. We chatted about going the Kickstarter route, swearing, why teenagers scare him, and pondered one of life’s most interesting questions: “Is it still called skinny dipping if you’re fat?”

Can Make Believers make believers out of the non-believers?

I think so. I think I’ve finally reached the perfect formula — there is a balance between hip-hop and other genres that I deal with on this record. R&B, funk, swing, punk rock, salsa and dancehall, instead of just hip hop beats played with a sample on top. I’ve found a way to incorporate the actual rhythms, the post-production feel and all that into each song so it’s a hybrid — and musically, it’s more sophisticated and unique than what I’ve done. Lyrically, I’m kind of pulling like a Harry Potter-type behavior with this, and I’m kind of letting my albums grow up right along with my daughter. The ones I have to work hardest turning into believers are the people who even wonder why kids’ music exists in the first place. I think this album is both sophisticated and specific enough for families that it justifies itself instantly.

I sense a very retro vibe on the album. Not just an old school hip-hop vibe, but a ’50-’60s vibe. The chorus on “Hi-5 for the Hi-Dive” would sound perfect on Dr. Demento’s radio show.

Totally. The only complaint I’ve heard about the record is that it is too old school. And honestly, I took it as a compliment.

You write a lot of the lyrics with your daughter in mind. What will happen when she gets too old for the kids’ stuff?

Good God, I have no idea. (Laughs) Teenagers scare the hell out of me. I have thought a lot about it, and I know I can’t make a plan for it until it happens. What I will say about her is this: Luckily, she’s both pretty grown up in the sense that she can go on tour with us and she’s really sophisticated about things, reads at a high level.  But she’s not in too much of a hurry to grow up and become a teenager. She’s 10 now and a lot of her friends are trying hard to be a teenager, but she’s not really like that. I’ll play it as it comes. She still has innocence to her and a novel way of looking at things. It’s that innocence and novelty that’s part of being a kid. She just may keep that and keep inspiring in that sense. I think some of the songs are specifically about being a kid — “Hi-5 for the Hi-Dive” being one, or maybe “Back Home.” I think I’m surrounded by enough kids to keep me inspired. I’ve thought about making music for teenagers, but I think the last thing teenagers want to do is listen to “music for teenagers.”

Well, you do bill Monkeywrench on your website as “For teens & grown ups!”

Actually Monkeywrench will get a proper release and push this year. I wanted to wait and make sure we did it correctly. We made a really high quality video for “The Zombie Song,” but it’s gruesome and includes eating guts, so it’s probably not best to be sharing that with the kids.

Do you help your daugher, AKA MC Fireworks, with her lyrics at all?

It depends on the song. We pretty much decided that for most of the Skidoo material, its ghostwritten by me. As she put it, it’s a character that listeners are used to and it would be best to keep it that way.  But you know, Bill Childs has the Science Fair record coming out later this summer and she has her first solo song on it. She did the hook, she did the lyrics, and she did the melody since she’s taking piano lessons.  I may have helped out, but it was 90 percent her. She has a collaborative recital in a couple days and maybe one day we’ll work together on an album. So I ghostwrite most of the lyrics, but most of the time it starts with an idea from her. For example, “Space Cadet” started after I picked her up from school one day and she asked, “Is it still called skinny dipping if you’re fat?” and I was like, “Aaaah, that’s a song!”

The first two Secret Agent 23 Skidoo albums were released through a record label. Talk about doing an album supported via a Kickstarter campaign.

The Kickstarter campaign was really great for many reasons. For one, I didn’t really have to worry about the budget during the recording process. Having that extra money allowed for time that would allow me to maybe experiment with an idea that I was working on. I think they really helped with the sounds on the new record being what it is. As an artist, it’s great to know that people are anxious and waiting for new material from you. As I was writing the record I had already gotten the Kickstarter money, so it was nice making a record for an audience I knew was already there.

I count 39 guest musicians on the CD liner notes . Isn’t that a bit excessive?

Early on, I started working with bands and I found that working with a band, you make better music and it helps you stand apart from everybody else. I don’t think of myself as just a family musician, but as a musician. I’m trying to push the envelope and expand the market, not just for family music, but the hip-hop market. I know not a great deal of the hip-hop market pay attention to me, but people hit me up with kids who have heard my stuff and people who don’t have kids are hitting me up, because they understand what I’m trying to accomplish. It’s not as if I think the bar is lower is because it’s family music. The short answer is, I do it because I think it is what sounds the best and that’s what can make the song in my head come to life. It helps there are a ton of great musicians here in Asheville.

What makes Asheville so special?

Asheville is a real bohemian type of city. It’s cheap enough to live here and people can try and live out their dreams. A lot of friends have left for NYC, but the cost of living there has prevented them from doing it. Down here It’s  the South, but it’s probably too expensive for the rural South, it’s cheap enough people can have a house or an apartment and still have time to pursue their career as an artist. The quality of culture you get here is still top notch. It’s not as diverse as I would like to see it, but beyond that the restaurants are phenomenal, the music is phenomenal, the bars are phenomenal.

The Big Ol’ Nasty Getdown is  a project that you’re featured on with Gift of Gab. How did that come about?

I’ve had some contact with P-Funk from my days with my first band, GFE — Granola Funk Express. We played together for about 10 years. In those times, our road manager had been the road manager for P-Funk back in the day. That’s how I was able to get some of P-Funk to play on Monkeywrench. But for this project the connection wasn’t from that contact, but from Yo Mama’s Big Fat Booty Band who have played a ton on my records. They have a lot of contact with P-Funk, and they’re kind of carrying the torch in a sense — it’s a big crazy funk band live show that talks wild space stuff. So they called me and asked if I wanted to be a part of this project and a remix of a P-funk song.  I did three verses on it and made the beat. Then they called me back and said, “Do you mind if we replace your second verse with Gift of Gab?” and I was like, “Hell no I don’t mind! But in return, I need his contact number.” And that’s how Gift of Gab ended up on Underground Playground and the Monkeywrench album. That was a fun project to do. I have a lot of respect for P-Funk and a lot of respect for Gift of Gab. Being on a song with both of them is amazing.

I had never heard you drop a swear word before, but you drop ‘shit’ on the The Big Ol’ Nasty Getdown. Was it hard to turn the adult switch back on again?

You know, I’m not sure how many fans in the kids’ music scene this answer is going to get me: I don’t believe a lot of words that are considered bad words are actually bad words. I believe racial slurs are bad. I believe the word “hate” is bad. I believe it’s the energy behind the word you’re saying that means something. For example, if I were to say Bob Marley was positive as shit, I don’t see how that can been seen as a bad thing. If I tell you, “I hate Jews” — that is a horrible thing. The reason I don’t swear on the kids’ albums is because I’m respecting parents who feel that same way about their children. And obviously, I wouldn’t sell many records. In my personal life, I don’t have a problem with a lot of those words. I’d prefer to use some expletives sometimes. It’d be more fun.

(Laughs) I gotta say, at some point when I was on stage explaining to the audience exactly what they had say during “you gotta be me,” the irony quickly came apparent. “Gotta Be You” is the shortened version of the hook “your best friend has gotta be you.” Whereas “Gotta Be Me” is about individuality, “Gotta Be You” is about being your own best friend. They’re both rooted in the social interaction kids have, but watching my kid grow up, I could see a little deeper into what actually happens. Yes, you have to be yourself, but you have to believe in yourself in order to make that work. You have to be your first believer. You have to respect yourself first.

Outside of more money for artists, what would you like to see from the family music industry?

I would like to see the media treat it as the phenomenon that it is — not just New York and a few scattered cities across the country. This is something legitimate you can take your families to. Just like when you were in your 20s going to shows, seeing bands on the cutting edge, now you can do the same thing with your families. There is no reason artists like myself shouldn’t be able to book a week’s worth of shows. There is no reason parents can’t take their kids to a family concert at 5 PM on a Tuesday, the same way they take their kid to a movie. I’d like to see the touring circuit expand. I’d like to see the national consciousness of it expand, so people know it’s a much more fun, unique and rewarding experience that you can take your kid to compared to a movie.