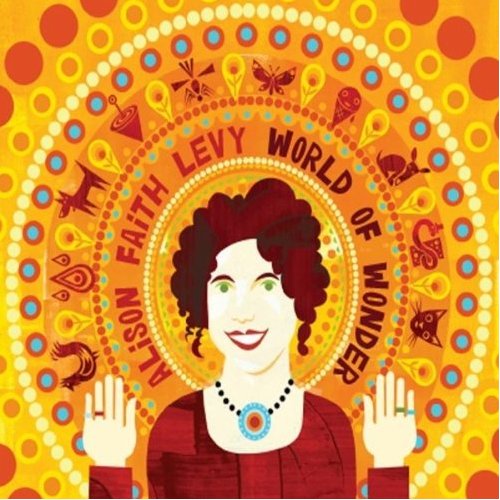 After five solid years of recording and touring with the Sippy Cups, Alison Faith Levy needed a break, so she took a musical detour and created McCabe & Mrs. Miller, an Americana band. But she couldn’t fully kick the kids’ music habit — she started playing shows at a local bookstore, and the rest is history.

Briefly intruding on her busy schedule, we talked to Alison about her new solo album, World of Wonder.

Walk us through how you got to this point in your career. The Sippy Cups, then adult Americana music, and now back to kids’ music as a solo Sippy Cup.

The Sippy Cups kind of casually disbanded and parted ways. We were taking a break. We were touring a lot, it was very intense and we just need a break. Then I started this Americana band that I put out a record with. Then I started playing music for kids in the local bookstore, just very casually. I just started writing songs. I would wake up at 6 AM on the days I’d go to the bookstore and bam, I’d have a new song in my head that I’d want to write.

Soon enough, I had enough songs for an album and then I started to get bookings for shows at libraries and festivals. Then people were asking me to put out a CD so they could buy the songs. It just naturally evolved in to a full-fledged project. So I just called up my friend Allen (producer/Orange Peel Allen Clapp) to come in to the studio — let’s make a real record and have fun with it. Then of course, I went bananas on it and just went for it. It just wound up being such much more than I originally planned it to be — and I’m so happy with how it turned out.

Lots of kids’ music has a very simplistic feel to it. Yet on your record, it has very full, Phil Spector vibe to it.

The Sippy Cups were always about that big, full sound. We always wanted to write songs that kids could relate to, but make a record we wanted to hear. I think I did that on this record too. I don’t want to hold back just because it’s kids’ music. If I hear something musically that I think serves the song, I want to go for it. I’m willing to take some chances with the production. But I think kids can enjoy it; I think parents can enjoy it. It’s important for me to have the song sound the way I hear it in my head, which is a very full sound. And with Alan, I barely had a piano, vocals and guitar on the demos. He just  got it and we were able to run with it.

Was it difficult recording without other band members in the studio?

It was just the opposite — it was so easy. I love to collaborate, but I also love to see an idea through from start to finish. I do love the group discussion and being in a band is all part of that. Having six people in the room makes things move a little bit slower. The product can be amazing, but this was just a different process. It was kind of fun; there was never a debate. I could just have a good time with it.

Does the writing process between adult and kids’ music ever bleed across genres?

I’m always writing, but I tend to write on a project basis. Right now I’m completely immersed in the kids’ music. I’ve been around kids a lot lately, and they’ve inspired me. Although a couple weeks ago I did a gig with my Americana band and it was weird being up on stage as this bluesy momma. I kind of forget about that part of me.

Talk about the different joys between an adult show in a dive bar compared to a kids’ show at a library.

Don’t make me choose!  I honestly love them both so much. They’re both completely different, but I enjoy each for different things. I get such a joy from connecting with the audience. Whether I’m belting out the blues with this super loud, kick ass roadhouse band or if I’m jumping up and down with a bunch of three-year-olds, I get the same joy. Even though it’s completely different music, I get the same adrenaline rush when I’m performing. When the crowd responds, it just puts a smile on my face.

Since it’s a solo record, did you feel you had less expectations on this album?

A little bit, but I always worry that I might be pushing too far with the record. You know with the lyrics,  it’s always intended for kids, but there are some pretty sophisticated moments where I worry that I might have gone too far. Ultimately, I have to go with my heart and what I feel and how I should convey the song. You know there is a simple song like “Baby Anteater” and then there’s “Eye Of The Tornado,” which is about emotions and chaos and about finding a peaceful place amongst the chaos. I was hoping that it would give a nice message to  kids, but it’s a sophisticated idea. There would be times I would look at Allen as ask “Am I going too far?” and he would tell me “No, just do what feels right. You’re communicating.”

How do some of your Americana musical peers  perceive your kids music?

I think they don’t quite get it. They think it’s cool that I do it, but it’s every alien to them. They’re super supportive. Some have heard the record  and love it, but they don’t quite understand it. I try and get them to come to shows so they can see what it is all about.

It’s very difficult to make financial headway in the kids’ music scene. So why do it?

I’ve never made an album thinking about whether I could make a profit on it. What’s good about kids’ music is there are lots of opportunities to perform that actually pay pretty decently. That’s a nice alternative to playing adult music in a smoky bar with a tiny guarantee. With kids’ music there is at least a level of performance income that you can earn. Having a CD out also helps my profile. Obviously, I would hope to at least be able to break even on the record. Ultimately, I made it because I wanted to make a record. I hope people enjoy it — and that’s the most important thing to me.

Alison Faith Levy’s World of Wonder is out now. Buy your copy here.