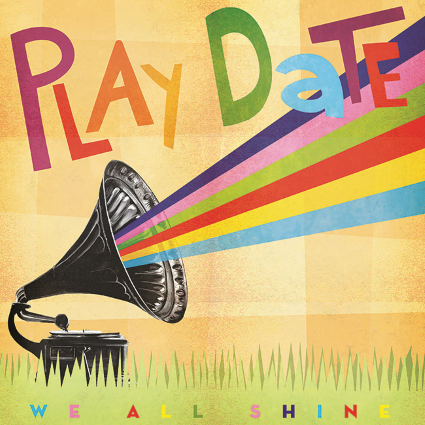 Play Date is Greg Attonito of Bouncing Souls and his partner in crime, Shanti Wintergate. They have returned with their second album, We All Shine, and shine they do. The record is the follow up to their debut record Imagination that was released on Mike Park’s Fun Fun Records. Despite being musicians for decades, writing music for families is an entirely different beast. And not nearly as simplistic as some might think. Thankfully, PlayDate are starting to find their groove. We All Shine is a gleeful, power pop paradise.

Topics on this album are what you would expect from a band with only two family records under their belt – Colors, hugs, love and a cardboard box. We All Shine is also interspersed with witty PSAs about fruits and vegetables that keep the album moving.  Greg & Shanti show signs of really stretching the kindie genre in new directions.  I’m anxious for what’s in store for albums three, four and five (and hopefully more).  Seriously, go buy this record so that have that opportunity.

You can buy the record for a mere $10, right here.