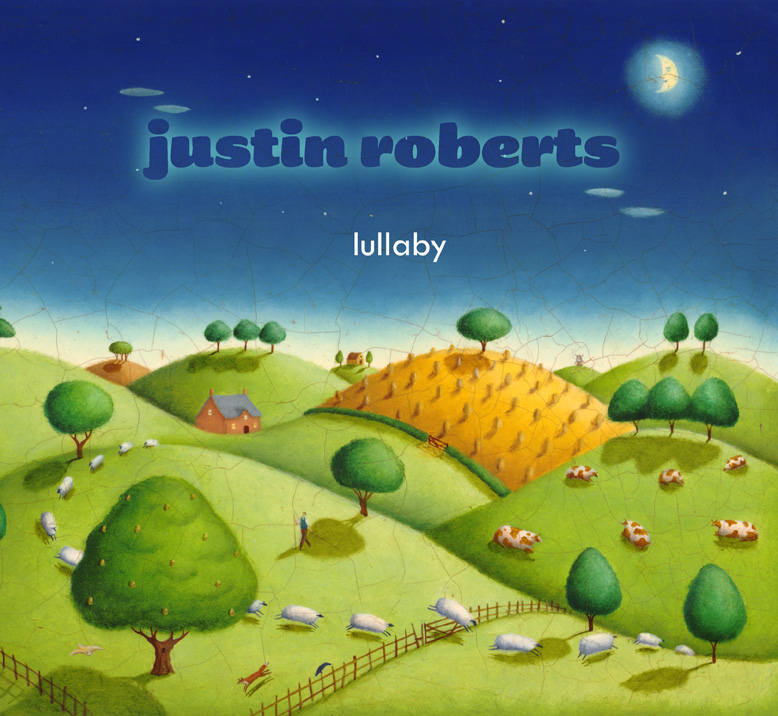 Can you make a lullaby record that is not boring? The answer is “Yes” because Justin Roberts just did. Lullaby is a gorgeous, engaging and beautiful record. The perfect album for a pre-bedtime ritual. The string arrangements, the vocals – it’s Justin Roberts in top form. Again.

I first heard this album 4 hours after my second child was born. It was a magical moment, holding my newborn daughter watching her eyes slowly close as we listened to these gorgeous lullabies.

*Normally I get a chance to talk to artists over the phone and really engage in a conversation and can follow up based on what they say. Unfortunately, my new job limits my abilities to do that, so I just sent over some questions for Mr. Roberts and here are his answers*

Is a lullaby record a present to the parents who think your music gets their kids too riled up?

No, not really. I’ve thought about doing a lullaby record for some time. Initially, some folks had suggested that I just compile all my lullaby-like songs on one record. I didn’t really want to re-release the same material so I thought about orchestrating old songs, and then decided to just write all new songs for the record.

You mentioned in the past that song writing can be a difficult process. Was it is easier when making a lullaby only record? Did it allow you to focus on writing a certain type of song?

It wasn’t easier necessarily. But it was certainly different. The biggest problem was figuring out a way to keep the record interesting even though all the songs were slow. I abandoned the project for that reason and then took it up again when I thought of writing songs in different slower genres (70’s soft rock, bossa nova, r & b, etc.)

How were you able to get the Chicago Symphony Orchestra involved on the record?

Liam and I were trying to figure out who to get to play the orchestral parts and I realized that my longtime photographer, Todd Rosenberg, was also the photographer for the CSO. So he was supremely helpful with putting me in touch with everyone and they were all fabulous and fun to work with.

Your quieter songs on previous records were always tracks that stood out to me. Like ‘Song for You’ or ‘Sandcastle’ stood out because they were next to more uptempo songs on the album. Do you think some of those special moments are missed by putting all the softer songs on one record?

If I thought the songs were being compromised by the setting, I would not have released the record.

Were these songs sitting around for awhile or were they all new and written specifically for this album.

Just like any other record I’ve made, I wrote brand new songs from scratch and went through older fragments searching for ideas. All of these songs were completed in the last year or so, though some were melodic or lyrical fragments from awhile back.

Will you be doing lullaby only concerts?

I might do a few lullaby-only in-store visits this winter.

How fleshed out are the songs before you start collaborating with Liam?

The recording is a pretty faithful recreation of my demos. I arranged the songs on Logic using a MIDI keyboard and wrote most of the songs that way. Very little guitar was used in the writing process. But, getting to hear the parts played by professional English horn players and harpists was incredible.Gerald (Dowd, the Not Ready for Naptime Players drummer) is a lot better at pretending he is a 70’s soft rock drummer than I am.  In production, Liam went for a very 1970’s analog sounding mix, which works really well for the disparate styles. The one that we changed quite a bit was “Easier to Do,” which originally was more of a slow jam with analog drum machine. We decided to use Gerald and a jazz pianist and make it a little more organic sounding.

Lots of children’s artists play songs for their kids to test them out. Since you don’t have any children, does that make Liam Davis your son?

I rarely if ever test market my songs with children and don’t think I would change that if I had kids. The song has to be meaningful to me and other folks who I care about and respect their musical taste. I’m writing for everyone when I write family songs.

Nobody makes kids music to be rich and famous, but have you reached a comfort level or managed expectations in your career? Tour on the weekends, release a new album every 2-3 years, sell “x” number of albums, make “x” amount of dollars?

I don’t think anyone who is a self-employed artist reaches a level where they stop worrying about what the future holds but I’ve been lucky so far. With the way the music business is changing as more and more people listen to music on streaming sites and don’t purchase recordings, I’m a little concerned about how I can keep making “big budget” records with truly professional musicians but I’m going on faith that it will some how get figured out and so far it has worked out.

I saw you this summer in concert. At one point, Liam (as NYC street-talking, Willy The Whale) made a slight dig at your songs, saying that they all have the “ba, ba, ba” at some point. Are you subconsciously trying to keep yourself from writing that way?

At that same concert, you also did a new, non-lullaby song at the show. Do you have plans to release a new record in 2013?

Yes, we are planning on releasing a record called Recess in 2013. About half of it was recorded while we were working on “Lullaby.”

Artists such as Dan Zanes, Caspar Babypants and others have released books tied with their music. Have you thought about trying to do that as well?

I’m releasing a book with Putnam’s in 2014 called “The Smallest Girl in the Smallest Grade,” which is adapted from the song “Billy the Bully” http://www.justinroberts.org/music_naptime.php

Home concerts on the on rise and yet, you’re tackling something a little different. You’re working on home plays. Can you share some details on how that came about and who’s involved?

My college friend Eric Ziegenhagen and I were discussing house concerts and wondered why no one was doing house theater. I’m a big fan of the theater. I find it to be one of the most transformative forms of art. So, we decided to try doing the same thing that folks were doing with music with theater. I suggested a play by Craig Wright (who happens to be my friend and the person that wrote two songs from the “Why Not Sea Monsters?” CDs) for the first one. He currently has a play on Broadway called “Grace.” Eric found some amazing actors, John Roberts (who also went to college with us), Tracy Kaplan (from Theatre 7) and Brad Smith (who is also a very accomplished musician – Sad Brad Smith) and we started putting it on all over Chicago. It was a blast. We’re hoping to do more this year and next.

For more, read this article from the Chicago Tribune.

What was the moment where you realized you had something special going on with children’s music?

Probably in 1992, when I played “Giraffe/Nightingale” (a song from my college band – Pimentos for Gus) for the preschoolers I was working with. but I never entertained the idea of being a kids’ musician at that point.

You’re on Twitter and Facebook, but you’re not sharing every possible detail about your life. By not sharing are helping keep the mystique of an artist?

I don’t think most of what I’m thinking or doing is that interesting to share. But, if it’s creating a mystique, I’ll keep it up.

You have also done some adult shows with Robbie Fulks. Are you writing adult songs? How close are you to releasing a record for non-kids?

What were the songs you grew up listening to that inspired you to pick up the guitar.

Albums can be formed based on what the musician has been listening to at the time or recording, so what are you listening too?

Lullaby will be released on November 20th. You can pre-order your copy soon from Justin’s website.