During my many proud, sugar-filled years as a junk food reporter, I’ve often written about food companies’ inability to leave well enough alone, and how it almost always leads to failure. As gluttonous consumers of empty calories, we crave what is New and Limited Edition; problem is, our nation’s major lard merchants perfected most of their classic offerings decades ago, and most attempts to make them different and/or exciting again only end up making things worse. (Failure, thy name is Pebbles Boulders.)

All of which sort of sums up my feelings regarding the growing number of Oreo variations churned out by Nabisco over the last few years. Chocolate-covered, mint, peanut butter, “golden,” “Berry Burst Ice Cream” — they’re all just pointless dicking around with a formula that was perfected the first time someone stuck a layer of soft, sugary goop between two chocolate wafers. I realize some people like those other flavors, but as far as I’m concerned, those people are worshiping false idols; the only Oreos that have ever been worth a damn are original and Double Stuf.

Until now, that is. 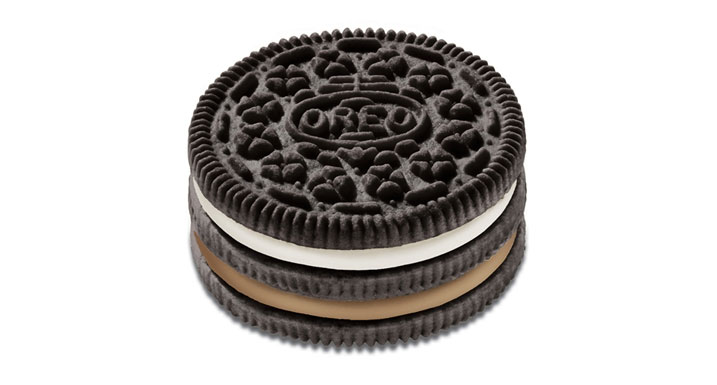 Gentle readers, I give you the Triple Double Oreo, which is exactly what it looks like — two Oreos jammed together, Human Centipede-style, creating an evolutionary step forward in crunchy sweet things that come in plastic trays. I seriously considered just copying and pasting the lyrics to “God Bless America” for this post, because that’s the music I heard in my brain as it tried to shoot out of my eye sockets and ears so it could gorge directly on a full package of triply doubly goodness.

What did I do next? The only thing I could do — head to the register, package gripped in trembling hands, and buy myself a whole bunch of these things. And now, God bless America, I’m stuffing my stupid face full of these wonderful things, harnessing the magic that only mashing lard and chocolate together can bring. FOR LO, I AM THE SORCERER SUGARHIGH, AND I WILL EAT FOREVER, RIDING MY MAGICAL OREO STEED ACROSS THE PEACEFUL, SUN-DAPPLED VALLEYS OF HIGH FRUCTOSE CORN SYRUP AND SATURATED FAT.#/$

[Jeff Giles was found slumped over his keyboard in a puddle of what we hope was drool, one fist clutching an empty package of Triple Double Oreos. He is under strict medical supervision, and is expected to make a full recovery.]