I haven’t really thought about the magazine in years, but when I was a kid, MAD Magazine was the funniest, most subversive thing on the racks at my local comics shop, and I devoured its pages religiously — along with a number of its inferior imitators, like Cracked, Crazy, and the short-lived Plop! In fact, as I was getting ready to write this post, I remembered the day I brought my copy of MAD’s infamous “middle finger” issue to school, only to have it confiscated (and, I’m sure, receive a stern talking-to from my appalled parents).

These were pre-Internet days, you understand, when a major media corporation could do something like publish a vaguely dirty satire magazine eight times a year and force its readers to wait patiently for the next issue. And not only that, but we actually had a shared culture back then, full of ripe targets that just about anyone reading would be familiar with. I’m not saying it was the golden age of satire, but none of us knew we were living at the end of the era when the act of smuggling a cheap bundle of newsprint home in your backpack was still a defiant thrill. MAD wasn’t always funny, not even then, but it was awfully cool.

Of course, like any satirical institution, MAD has been fending off charges of dwindling quality and cultural irrelevancy almost from the beginning; as art director Sam Viviano once quipped, everyone thought the magazine was at its best “whenever you first started reading it.” But looking back, I think it’s hard to overstate its influence — not only on American humor, which has absorbed its gleefully irreverent tone so thoroughly that MAD’s version now seems stupidly quaint, but on its generations of readers.

Bookshelves could be filled with everything that’s been written about the long shadow MAD cast over pop culture, but I think it’s worth restating here, if only briefly, that everything parents hated about the magazine — its rude humor, the vulgar joy it took from tipping sacred cows, its (frequently, depressingly correct) assertion that everything was a stupid waste of time, including MAD itself — was what made it not only so entertaining, but such a powerful educational tool.

Yes, I really wrote that, and let me explain: MAD treated you like you were smart enough to get the joke, even when you weren’t, and trusted you to figure things out for yourself when the gags were over your head. (As Salon’s David Futrelle remembered, “I seem to remember asking my parents what ‘graft’ was.”) And maybe more important, I’d argue, is the way MAD’s sneering tone helped its young readers learn critical thinking. Writing that makes me feel funny, but I think it’s true. As Brian Siano put it in the Humanist: “For the smarter kids of two generations, MAD was a revelation: it was the first to tell us that the toys we were being sold were garbage, our teachers were phonies, our leaders were fools, our religious counselors were hypocrites, and even our parents were lying to us about damn near everything.”

But as time wore on, MAD stopped seeming so subversive. By the time The Simpsons started ruling Sunday nights, its laff-a-minute pace and jaundiced view of everything were pretty much the norm. During the ’90s, we gorged ourselves on cynicism and irony, and as the grandaddy of it all, MAD couldn’t help but look old and out of touch. And as the 21st century dawned and the monoculture really started to fray, worthwhile targets for the magazine started drying up — between that and the problems facing the print industry in general, it’s pretty impressive that MAD’s still publishing at all, even if most of us think its best days are far behind it. 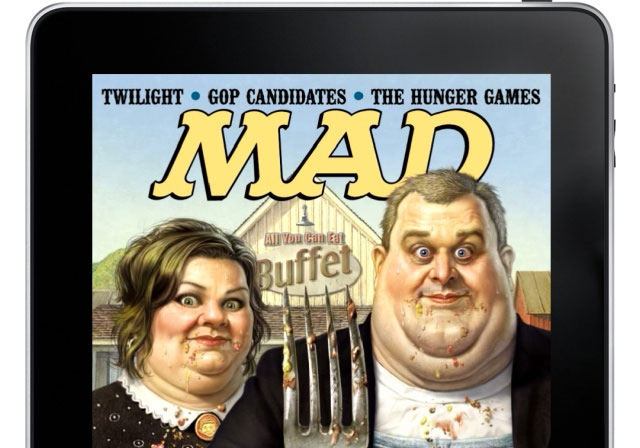 All of this is why, even though I haven’t picked up an issue of MAD since the ’80s, I decided to check out its new iPad app. If Cracked can reinvent itself as one of the Web’s smartest humor destinations — and roll out its own killer app — why not MAD?

The answer to that, if you’re already tired of reading, is “because MAD isn’t funny anymore.” But if you want details, here they are. What MAD’s offering here is a digital subscription to the magazine — it downloads to your iPad’s Newsstand for $4.99 an issue or $9.99 for a one-year subscription. Because I’m an optimist, I took a chance and opted for the subscription option, figuring if I liked it, the extra five bucks would be worth it. The result? To cop a phrase from the magazine’s glory days: Echh.

It just isn’t funny. I think this is partly because, as I said, there aren’t as many viable targets these days — as you can see above, this issue’s main feature makes fun of Mike & Molly, which is a decent-sized hit by today’s standards, but with an average viewership of around 11 million per episode, it’s far from a cultural flagship. That kind of scrambling means filling out the rest of the magazine with lame potshots at easy targets like Twilight and the GOP candidates, and bungling a Hunger Games lampoon by settling for screenshots from the movie with horrible fake lines pasted over them.

I didn’t go in expecting to laugh at all of it, or even most of it, but I was hoping for at least one guffaw, and I didn’t even get a lousy chuckle. In fact, I was bored while reading it, which is probably the worst thing I can say about a magazine I used to have to hide from my parents. By the time I got to the end — a double dose of MAD fold-ins — I was just kind of sad.

I’m not sure it’s all MAD’s fault, because outside of really heinous acts of cartoon violence, I’m not sure I can imagine anything it could publish that would make me forbid my own kids from reading it. Times have changed, and our cultural mores have shifted to such a degree that I don’t know if a magazine like MAD can really be subversive anymore. On the other hand, I’m pretty sure they could do a better job of being silly and dumb. Maybe I just picked the wrong issue to start with, but if this is where MAD is these days, they should just stop. It’s embarrassing.

From a technical standpoint, the app isn’t bad at all; like Wired or Entertainment Weekly, it offers magazine content that’s been optimized for tablet viewing, with an animated cover, tap-and-zoom navigation, and sharp text on the new iPad’s Retina display. If they can ever figure out how to put together worthwhile content, they’ve built themselves a decent delivery mechanism — but you shouldn’t hold your breath waiting for that, or waste your money on a subscription. Stick with the far funnier (and free!) content being cranked out on a daily basis over at Cracked.