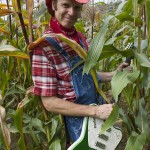 Farmer Jason is set release his latest kids record, Nature Jams on February 7th. It will be the debut release for the brand new record label and entertainment channel, MyKaZooTV.

Farmer Jason was kind enough to take time out of his busy schedule to chat with us about the new record and MyKaZooTV.

Dadnabbit: Talk about the partnership with MyKaZooTV came to be and why it’s makes business sense for kids musicians:

Farmer Jason: For starters the two guys running it, Rick Dobbis and Richard Ellis are really sharp, very experienced business men.  They’ve run major record companies. Right off the bat you have these guys who don’t have false assumptions about what they can and can’t do. They are very committed to bringing quality music to families. The family music industry needs a good record label. There are some, but not enough. This should help without a doubt. It’s a strong idea with lots of potential.

Dadnabbit: Similarities and differences between releasing a Jason & the Scorchers record and a Farmer Jason record?

Farmer Jason: Certainly the Farmer Jason world, in terms as creating songs as catchy as possible is the substantial difference but the energy level is about the same. The exuberance with a Scorchers record is still there with a Farmer Jason record. Let’s have fun and break some barriers.

Dadnabbit: Does having a good cup of coffee in the morning help decide if you’re going to write a Scorchers or a Farmer Jason song?

Farmer Jason: Most of the time it is project driven. I know I have a project in front of me and that’s what I write. I don’t tend to write songs all the time, I tend to write for projects so it’s not as schizophrenic as you might think.

Dadnabbit: The first Farmer Jason record was an accidental success, that had no preconceived notion about it. How do you follow it up, knowing how high you’ve set the bar?

Dadnabbit: The guest list on Nature Jams looks like a hip-hop record with different guests on each track.

Farmer Jason:  Some of the songs were written and then I tried to find an artist that would fit. But some were custom made. “Take A Hike” for example I knew right away would be a perfect song for Mike Mills (R.E.M.) I have know him for years and his personality. But primarily, the songs are written first then the  guests are added later on, with who I thought would fit the chemistry of the song.

Dadnabbit: How has your friendship with Todd Snider developed into him becoming a regular on Farmer Jason records?

Farmer Jason: His first show in Nashville was opening for my band in 1992. The Farmer Jason collaborative effort has really grown organically. Todd doesn’t have children. But there is something about his personality and tone of voice that connects with both parents and children listening to the records. Even little 3 year old kids get the message that is Todd Snider. It’s always a high point on the record. It’s just a spontaneous party when he’s in the studio.

Dadnabbit: How accepting were Scorchers fans to seeing you write kids music?

Dadnabbit: Is there a freedom to writing kids music over a Jason & The Scorchers song?

Farmer Jason:  One the great blessings of being Farmer Jason is walking into a room full of 4 year olds and having no idea what to expect. It truly is spontaneous. Being Farmer Jason allows for a much bigger artistic freedom.

Dadnabbit: How did Jason & The Scorchers end up as a guest on Nature Jams?

Farmer Jason: I knew making a guest record without the Scorchers would be a crime. I think it is a magical track. When our drummer is talking about glaciers in a Swedish accent, it is really a magic moment.

Dadnabbit: Few children’s artists’ have intros on their songs. Why have you chosen to have those on your records?

Farmer Jason:  There is always a debate about doing intros. Some people really don’t want to hear introductions after the first time. I know some kids have memorized the introductions; it’s something kids don’t seem to mind. I have always felt there should be some type of education going on in the songs and on this album I think there are some strong educational moments in the intros.

Dadnabbit: It’s becoming harder and harder to make a living music as most money is made on live shows. Has making kids’ music been financially beneficial to you?

Farmer Jason:  I make a living off of my music. Luckily we’ve been able to do enough live shows and make money doing it. I’m very fortunate to be able to make a living with what I love to do, playing music. Farmer Jason is the center of my career and I’ll be playing live shows for kids for as long as possible.

Dadnabbit: As you write songs for your kids, do you find yourself writing for older kids as your own kids get older?

Farmer Jason:  I think the new record is primarily written for slightly older kids 6-12 years old which is my daughters age range. You can follow along on my three albums and see me writing for older kids each time, but for the next record I think I’ll go back to more a preschool aged focus.

For all things Farmer Jason, check out FarmerJason.com