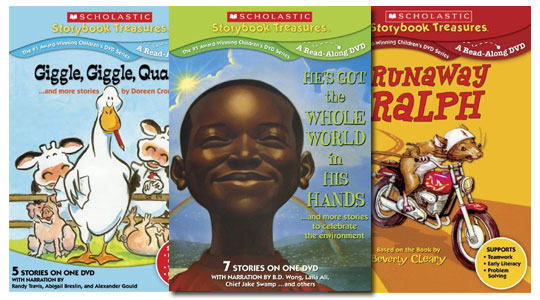 Maybe that’s just cynicism, though. As parents, we’re so used to being inundated with pitches for more crap, and so accustomed to being disappointed by people who are supposed to have our children’s best interests at heart, that something like the Scholastic Storybook Treasures series can seem like a dirty trick even when it isn’t. There’s definitely something a little off-putting about a book publisher porting children’s titles to DVD, but that doesn’t really take away from the fact that these are wonderful books, and if you’re the type of parent who doesn’t see anything wrong with television in moderation, then having the option of letting your kids watch literature instead of Cartoon Network is fairly appealing.

There isn’t much flash in these movies, but that’s part of their charm; these are gentle, low-key shorts, devoid of the usual production gloss and quick-cut edits. In some cases, this is because of their vintage — Runaway Ralph, for instance, stars a young, pre-Wonder Years Fred Savage — but even the newer films have a pleasant, down-to-earth vibe. They’re fun to watch with kids — the kind of entertainment that’s calming without reducing little ones to drooling mouth-breathers. And they’re well made.

Runaway Ralph is the slimmest title, offering the Savage-led live-action version of the Beverly Cleary classic along with a stop-motion animated adaptation of Jane Yolen’s sci-fi story “Commander Toad in Space,” featuring the voices of Mark Hamill and Nichelle Nichols. At an hour in length, it’s significantly shorter than Giggle, Giggle, Quack, but it’s also got the benefit of having a really well-known title on the cover, so Scholastic can probably get away with going a little light on the extras.

Finally, He’s Got the Whole World in His Hands is the timeliest of the three, collecting seven eco-minded stories — including the classic title song, performed here by Billy Joel bandmate Crystal Taliefero, and an adaptation of Karen Hesse and Jon J. Muth’s beautiful “Come On, Rain,” narrated by Laila Ali — and bundling them into an hour of stories about, well, the world. In terms of length, it might be considered a little light, but Hands includes a lot of great, award-winning stories, and segments like “Come On, Rain” and “Owl Moon” are some of the best in the Storybook Treasures series.

All things being equal, it’s obviously still better to read to your kids, but who says you can only do one? If your kids are already familiar with these books, they’ll get a kick out of seeing them on TV; if they aren’t, these DVDs still contain plenty of excellent entertainment, and at $15 or less, they’re all value priced. What else do you need?