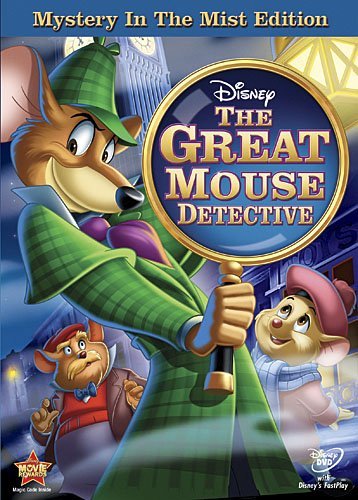 The resurgence of Walt Disney Animation is usually traced (get it?) back to The Little Mermaid, but as with most pop history, that’s not 100 percent accurate — though its efforts weren’t necessarily rewarded at the box office, the studio started its uphill climb years before Ariel longed to be part of our world. Case in point: 1986’s The Great Mouse Detective, which used a nifty voice cast and some early CGI/hand-drawn hybrid work to bring the Sherlock Holmes classics to kids.

Adapted from Eve Titus and Paul Galdone’s Basil of Baker Street books, The Great Mouse Detective uses a neat conceit — a sleuthing mouse named Basil who happens to share an address with Sherlock Holmes — to take advantage of the Holmes mythos without turning human characters into talking animals, a la Disney’s Robin Hood. (In a neat touch, cinema’s most famous Sherlock, Basil Rathbone, voices Holmes here, via some cobbled-together audio from an earlier film.) Detective isn’t a mystery in the traditional sense, given that the audience knows pretty much right away who the bad guy is — but that’s a forgivable sin, since the villain in question is voiced by a perfectly ominous Vincent Price. Nothing against Broadway vet Barrie Ingham, who plays Basil, but this is really Price’s show; it’s a shame there weren’t any sequels, because he could have turned the dastardly Ratigan into one of Disney’s top-tier villains.

As you might expect, given the film’s inspiration and the era in which it was made, The Great Mouse Detective could be a little intense for young kids — the storyline revolves around the kidnapping of a toymaker (voiced by Mr. Ed‘s Alan Young) and a plot to depose the Queen. There’s also some (gasp!) smoking, as well as various other forms of rather innocuous non-cartoonish behavior that parents may not want to explain. (Or you can just roll the dice and hope for the best — neither my two-year-old nor my four-year-old were bothered by any of it.)

So what makes this “Mystery in the Mist” edition so special? Well, for starters, Detective has been out of print for a spell; the last edition was a two-disc remaster released in 2002, which was apparently long enough for the Disney elves to apply a fresh coat of (slight but noticeable) digital restoration and a Dolby surround soundtrack. If you missed the last reissue, and don’t feel like paying collector’s prices for a used copy, this is the Mouse you seek. Just don’t expect much from the bonus materials, which are actually lighter than the ’02 edition; the most interesting thing here is a somewhat perfunctory making-of featurette, and it’s surrounded with features both unnecessary (a bit on how to use Disney’s digital copy technology) and obnoxious (a commercial for a Suite Life Blu-ray).