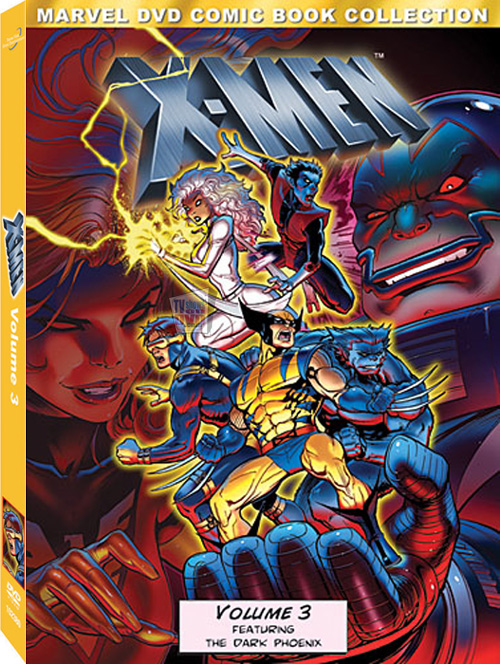 Picking up where they left off earlier this year, Disney and their new acquisition, Marvel Comics, have released the next two volumes of their “Marvel DVD Comic Book Collection” with the 2 DVD sets, X-Men Volume 3 and X-Men Volume 4. These DVDs continue in the release of every episode from the 1990’s hit Saturday morning TV series. X-men aired for five seasons and featured a popular lineup of Marvels band of mutants from the early Clinton decade. Those characters included Cyclops, Jean Grey, Beast, Gambit, Rogue, Storm, Jubilee, Professor Xavier and fan favorite, Wolverine.

What I always liked about this particular X-Men series was the way it adhered to the mythology from the long-running comic books. Even though some of the characters were changed, the story lines about the Savage Land and  in particularly the Phoenix saga (in which telepath Jean Grey is gradually transformed into a God with unlimited power) were played out over a series of episodes that treated this show more like a continuing drama you’d find on prime time instead of a Saturday morning cartoon aimed at kids seven years and older.

Volume 3 contains the “Dark Phoenix Saga,” the conclusion to the Phoenix storyline. This four-episode story arc covers the point in time when Jean Grey’s brain is manipulated by Mastermind and she begins to lose touch with reality. Again, the animated series kept pretty close to the comic book story, although the outcome and fate of Jean Grey was radically changed. Other exciting episodes from the third volume include “Obsession,” in which Arcangel tries to destroy thee ultimate mutant villain, Apocalypse; “Nightcrawler,” featuring an appearance by the lovable, blue skinned furry mutant, Kurt Wagner; and “Orphan’s End,” a story involving Cyclops piecing together the fragments of his youth and learning who his father may be. 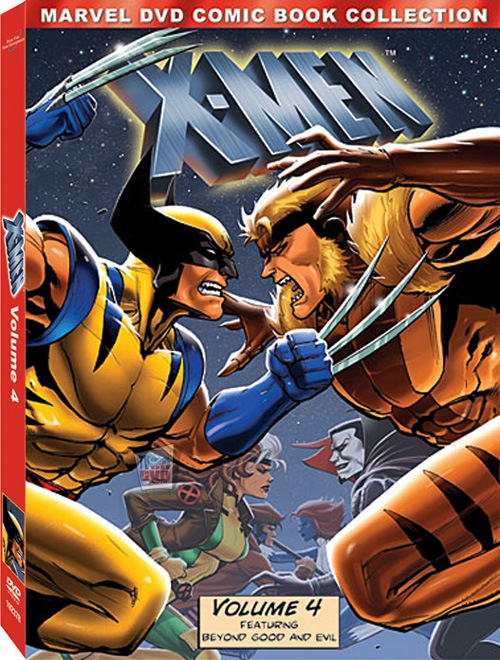 Volume 4 features the two-part Magneto episode, “Sanctuary.” In it, the X-Men’s arch nemesis invites all mutants who wish to flee Earth to  join him on his orbiting  asteroid, Asteroid M, to live free of the hatred and ridicule of humanity. Also included is the epic “Beyond Good and Evil”  a four-parter which features appearances by the then popular Cable and Bishop in a battle through time to save humanity from Apocalypse, and “The Lotus and The Steel,” a classic Wolverine episode that finds him leaving the X-Men and returning to Japan, where he spent his youth.

Full of drama, action, and a little bit of romance, these volumes do have some clunkers. “Have Yourself A Morlock Little X-Mas” is so sugary sweet you may have to vistt the dentist afterward. Trust me when I tell you it is sickening.  Moreover, some of the episodes were a little more heavy handed than I recalled. “Nightcrawler,” in particular, was really laying on the Christianity message. By the end of it I think everyone in the show was worshiping God. It felt a little too preachy for me.

Technically, the animation is still blocky, and the sound a little overbearing at times. Furthermore, some of the voice actors were a little weak. Still, with such great stories to tell, the misteps in animation and voice acting are easily overlooked.

For any child who is a fan of the X-Men movies, or who catches the Nickelodeon hit, Wolverine and the X-men, these two volumes (along with the previously released two) are a fine addition to their library. They ain’t too bad for the fan boy fathers, either.