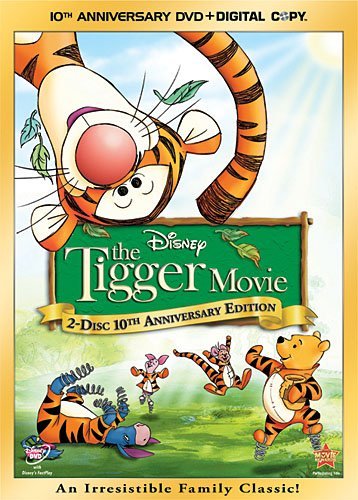 Nobody raids the vaults like Disney. Even now, in the era of the DVD’s death spiral, most studios refrain from pathologically reissuing catalog titles — particularly those that were never terribly popular in the first place — but Uncle Walt’s house has always treated everything it’s ever done (or almost everything, anyway) like a timeless classic. Which is why you shouldn’t raise your eyebrows (but probably will anyway, if you’re anything like me) at the double-disc 10th anniversary edition of The Tigger Movie, an enjoyable trifle that Disney sort of half-heartedly shooed into theaters roughly a decade ago. Part of a sort of low-profile renaissance for A.A. Milne’s beloved characters at the studio, The Tigger Movie is a kissing cousin to Winnie the Pooh and Tigger Too, a more fleshed-out (and less Tigger-centric) adorable lesson in things like acceptance, friendship, and personal identity. Where Tigger Too mainly revolved around Rabbit’s perennial annoyance with Tigger’s brain-damaged antics, The Tigger Movie puts the bouncy-tailed wonder in pursuit of the family he’s certain is out there — despite his famous (and, it must be said, joyous) earlier insistence that he was the only one of his kind.

The Tigger Movie was greeted with mostly positive, albeit lukewarm, reviews when it was originally released, and for good reason: Although it recycles pretty much every element of the earlier Pooh films, from the cuddly animation style to bits and pieces of the plot, it’s awfully hard to argue against something so wonderfully sweet and innocent, particularly in an era when the obnoxious, hypercaffienated ‘toon fare kids watch on Nickelodeon makes the Tom & Jerry and Road Runner shorts our parents were up in arms about look positively staid and quaint. There’s no violence here, no gross humor, no quick cuts or loud sound effects — just a short, gentle romp through the Hundred Acre Woods. At 77 minutes, it’s just about the perfect length for little ones who haven’t already been desensitized by Spongebob Squarepants and his ilk.

Ultimately, even though Disney’s resources would surely have been better allocated on something more original, the expanded Tigger Movie — which adds games, a Kenny Loggins music video, episodes of the Disney Channel series The New Adventures of Winnie the Pooh, and more, in addition to a digital copy embedded on a second disc — is still just as enjoyable as it was a decade ago, and even if it’s difficult to recommend spending $21 on such a needless reissue, if you’ve got a Pooh-a-holic in your home and plan to purchase The Tigger Movie, this is the version to own.