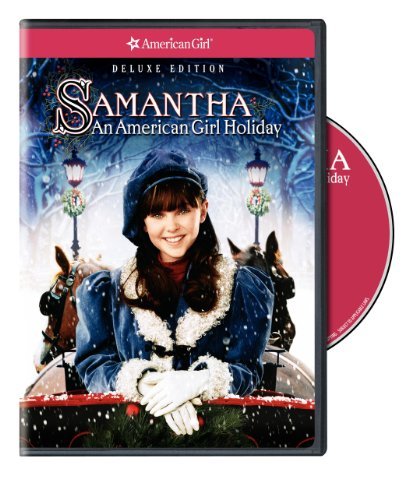 So apparently my love for my daughter knows no bounds, because not only have I refrained from discouraging her rapt fascination with the offensively priced American Girls dolls, but I willingly sat through Samantha: An American Girl Holiday. Twice. And I’m not sure whether or not it’s just paternal weakness speaking, but, uh…this movie really isn’t that bad.

Originally released in 2004, Samantha kicked off what has become a burgeoning film franchise — Samantha’s fellow American Girls Felicity, Molly, and Kit Kittredge now have their own movies — and even though Warner Bros.’ reasons for reissuing it now (Celebrating 25 Years of American Girl!) are just as flimsy as the reasoning behind that “Deluxe Edition” on the case (a new widescreen transfer replaces the original full-screen video), the movie remains a sweet, surprisingly thoughtful holiday confection with far greater depth than any toy-shilling tie-in has a right to boast.

Like most of her fellow American Girls, Samantha (AnnaSophia Robb) is as plucky as she is adorable, which is a good thing, because she grew up in the early 1900s, when poor kids had to work in sooty factories and handymen were known to drop dead of influenza, leaving their kids to suffer the life of the Dickensian orphan. But because nobody wants to buy a doll with raggedy clothes and tear streaks running down its coal-dusted face, Samantha didn’t have to worry about any of that yucky stuff: although she was an orphan, she got to live on the fabulous estate owned by her grandmother (played here by Mia Farrow, who apparently racked up substantial gambling debts at some point). And when Samantha’s grandmother couldn’t take care of her anymore, she went off to live with her oddly named Uncle Gard (Jordan Bridges) and his new wife Cornelia (Rebecca Mader) on their fabulous estate. Poverty is totally yucky.

But you can’t have a dramatic arc without some sort of conflict, and Samantha’s comes after she befriends servant girl Nellie (Kelsey Lewis). The adults in their lives aren’t exactly thrilled with this — Samantha’s grandmother tuts and tsks, explaining that poor people are happier if you don’t treat them like equals, and Nellie’s father is sick with worry that the girls’ friendship will put him out of a job. Actually, he’s just sick, as we soon find out when he croaks, leaving Nellie and her sisters to fend for themselves at the orphanage.

It’s all a little more complicated than that, but you get the idea. And so does Samantha, whose crusading spirit has been awakened by a glimpse of child labor conditions, and whose perky adorableness is strong enough to move mountains — or at least to give Samantha: An American Girl Holiday the apple-cheeked Very Special Ending you can see coming 45 minutes before it happens. It’s all a bunch of hooey, really, but there aren’t very many movies that take young girls seriously, or show them doing much more than shopping and obsessing over boys, which makes Samantha a rather intoxicating blend of queasy melodrama and uplifting entertainment for a demographic that really needs it. It makes this movie…I don’t know, almost important or something. Or maybe I’ve just had too much to drink.

One thing that isn’t up for debate: this is one of the least essential “deluxe edition” releases I’ve ever seen. I’m always in favor of getting rid of full-screen transfers, but there’s nothing deluxe about switching a title to widescreen format — and while this new Samantha adds new bonus features (“Votes for Women,” a discussion of the suffragist movement, and “All About Samantha,” which is exactly what it sounds like), it also takes two away, leaving the new version a decidedly mixed bag. On the other hand, nobody really cares about the special features where movies like this are concerned, so if you can pretend that the box really says “widescreen edition,” this isn’t a bad way to spend $13.99.