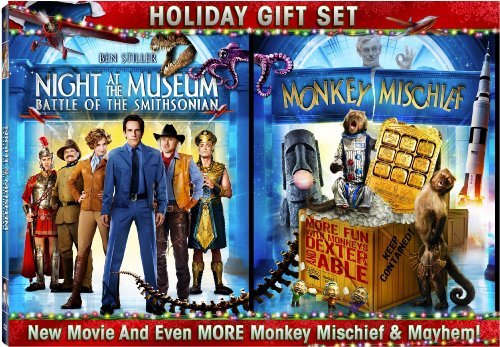 Adult fans of the original Night at the Museum may be a little disappointed with its loud, action packed sequel, Night at the Museum: Battle for the Smithsonian; I was. Because the thrill from the first film of seeing museum pieces come to life was gone and because Ben Stiller’s character, “Larry,” was no longer at his wits end trying to contain those same museum pieces, some of the magic is missing from the 2nd film. Battle for the Smithsonian is bigger, noisier and has all of the shortcomings most sequels have. However, it does have one saving grace, one key element that makes this DVD worth checking out: Amy Adams.

Adams co-stars as Amelia Earhart, or rather a mannequin of Earhart that comes to life when the magic tablet of Ahkmenrah (from the first movie) is shipped off to Washington to be placed in storage at the Smithsonian. Earhart teams up with Larry (now a wealthy entrepreneur) to prevent an evil Egyptian pharaoh, Kahmunrah (Hank Azaria) from opening a portal to the underworld and unleashing an army of the undead to take over earth. Adams, one of the most charming and likable actresses working these days, is pure delight at the legendary female aviator. She speaks in a rat-tat-tat-tat cadence that hearkens back to the era from which Earhart was popular. Adams gives her character a no nonsense attitude and gung ho spirit that pops off the screen and charms your socks off. Moreover, the way she carries herself and commits to the role makes watching Adams such a pleasure that whenever she’s on screen you overlook the shortcomings of this movie, which was wildly successful in its theatrical run.

What shortcomings? For starters, the writers tried to cram too much story into the movie. Because of the popularity of characters like Teddy Roosevelt (Robin Williams) Octavius (Steve Coogan), Jedediah (Owen Wilson) and the monkey that slaps Stiller, plotlines for these characters were crafted to appease fans. But, there was also an obligation to create new characters, like Bill Hader’s General Custer (portrayed as a complete boob) that go nowhere.

While the first film had villains in the form of Dick Van Dyke, Mickey Rooney and Bill Cobb, I feel the first film was more about discovery and Larry coming to terms with his own shortcomings as a father while trying to maintain his sanity. This sequel has a more traditional set-up, one in which the hero’s sole purpose is to stop the villain (Azaria’s pharaoh). As the pharaoh takes over the Smithsonian and works to open the portal, he recruits other known historical villains as his henchmen, including Ivan the Terrible (Christopher Guest), Napoleon (Alain Chabat) and Al Capone (Jon Bernthal). This shift in narrative structure also shifts the tone of the movie, making it less interesting and more chaotic.

That’s not to say that there aren’t many creative and whimsical moments throughout the movie. At one point, Larry and Amelia jump into various famous paintings to escape the clutches of the pharaoh’s men; at another point, while running through the Air and Space Museum, rockets blast, Clint Howard shows up in a cameo as a NASA engineer (a nod to Apollo 13) and the two heroes escape while flying the Wright Brothers plane. The Lincoln Memorial coming to life is also a funny bit.

And of course, there are the talents of Stiller and Adams. The on-screen chemistry these two share is sparkling and had me wishing that more time was spent with their adventure and less on Azaria’s pharaoh and his goons. I like Azaria and he does a fine job in this film, but to take away from the real magic of the movie, the developing romance between Larry and Amelia, was a big disappointment.

If you’re searching for a safe, harmless movie to place under the tree, one that you can put on for your children while you take that first post present opening frenzy nap, you could do worse that Battle for the Smithsonian. Kids will love the movie. There is enough slapstick and exciting action to keep them laughing out loud and on the edge of their seats. Indeed, my own two children have already proclaimed this film better than the first and have watched it four or five times already.

Disc 1 of the two disc DVD edition comes with standard DVD fare: excellent commentary by director/producer Shawn Levy, commentary by screenwriters Robert Ben Garant and Thomas Lennon (of Reno 911 fame), plus deleted scenes, a gag reel and an alternate ending. Disc 2 is all about the monkeys. Two informative featurettes on the monkeys used in both films, plus a couple of monkey activities for kids are the highlights.