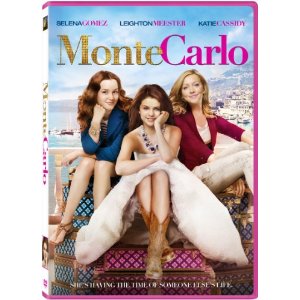 Things I learned from watching Monte Carlo, now available on DVD, with my 12-year-old daughter:

1. This movie is nothing like The Lizzie McGuire Movie. The film ads for Monte Carlo gave the impression that this is strictly a film about a small town American girl in Europe who looks like a rich heiress and they switch identities, essentially the plot of the Hillary Duff Lizzie movie from 2003. Instead, Selena Gomez’s Grace is small town girl who wants nothing to do with assuming the identity of the bitchy heiress she’s a doppelganger for. She gets roped into the shenanigans by her best friend. Additionally, Grace only continues the charade when she realizes that the heiress is in Monte Carlo to help promote the opening of a school for underprivileged children. Sure, identity theft is a pretty serious offense, but since it’s for a worthy cause, the adults let it slide.

2. Selena Gomez is actually a pretty good actress given the right material. This is the second film of hers I’ve watched in which she’s been out of the shadow of Disney. Her acting on the hit sitcom, Wizards of Waverly Place, can get pretty grating and Gomez’s character is selfish and mean. In Monte Carlo, the young actress is allowed to play naïve and nice, for a change, and she holds her own against more established actors like co-stars, Leighton Meester and Katie Cassidy.

3. Hey, this movie isn’t just about Gomez’s character. Meester and Cassidy share the same amount of screen time and follow their own story arcs over the course of the film. Unfortunately, you wouldn’t know this from the film’s marketing campaign when it was released in theaters. Instead of promoting this as a romantic comedy about three young women on a trip to Europe, it was aimed squarely at the young Disney crowd. A shame because Meester and Cassidy are two winning actresses and their time on screen is quite appealing. Which leads me to….

4. Leighton Meester is very, very charming and should be given more opportunities to play in romantic comedies. I’m afraid that her role on Gossip Girl may get her pegged as a certain type of character actress. In Monte Carlo, Meester provides a lot of the emotional growth you expect from a character in a movie. Her character, Meg, goes from uptight college student with some emotional issues, to someone you fall in love with by the film’s conclusion.

5. Did you know that Cory Monteith (Glee) is in this film? Neither did I! The guy only stars on one of the most successful pop culture phenomena in the past ten years and he was no where to be found in the TV ads! And this isn’t a case of the young man popping up in a cameo early in the film. Monteith’s Owen plays an integral role in the entire plot involving Cassidy’s Emma. Monteith is sturdy in his performance and makes a cute companion to Cassidy.

6. Andie McDowell still acts. Alright, that last one was a little snarky. I was surprised to see the once leading actress relegated to the “mom” role. She’s such a fine actress, adding much more depth to her few scenes than was probably on the page. I wish she did more acting. Oh wait, she’s in Footloose, isn’t she, playing… the mom. Somebody please write her an intelligent, mature romantic comedy right away.

To wrap this up, Monte Carlo is a safe, fun movie that you can watch with your daughter, whether she’s twelve or fifteen. For me, a dad who’s seeing some of his father/daughter time diminishing as she gets older and her interests don’t include her dad, it was nice that we got to bond over this movie. It’s even nicer that Monte Carlo is delightful and provided enough laughs and emotional moments to occupy an hour and a half.

By the way, I said that I’d get a quote from my daughter for this review. All I could get out of her was, “I liked it. I’d watch that again.” I guess that’s all you need to know.