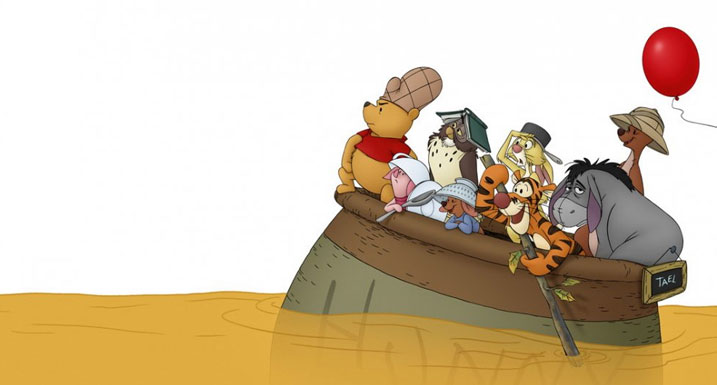 As parents, we all love to complain about the way children’s entertainment has gathered speed and volume over the last few decades, getting louder, dumber, and brighter until SpongeBob seems sedate. We bemoan pervasive merchandising, we yearn for the sweet simplicity of the characters we loved when we were young, and we groan every time someone rolls out a direct-to-video sequel in order to sell a few more toys.

But then what do we do when a studio actually gives us what we want? Disney found out the hard way over the summer when the very sweet, very simple, and decidedly retro Winnie the Pooh trundled into theaters and petered out after grossing a measly $33 million. Meanwhile, the toy factory-as-film Cars 2 made more than that in a single weekend on its way to a $551 million worldwide gross.

Parents, you do not want what you say you want.

But you can repent for your sins now, because Winnie the Pooh is here on glorious DVD and Blu-ray, with beautiful hand-drawn art, a storyline straight from Pooh creator A.A. Milne, and a perfectly kid-sized 63-minute running time. Unless your head is stuffed with fluff, you’ll get it now.

I love it, my children love it, and you will too. Plus, at $29.99 for the deluxe Blu-ray/DVD/digital disc combo pack, it’s also an excellent value. When was the last time you took a trip to the Hundred Acre Woods? Isn’t it time you headed back?