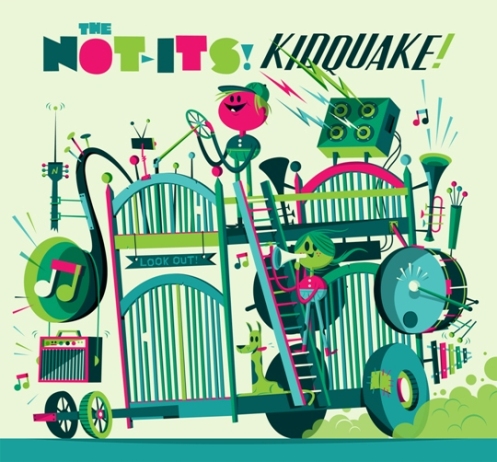 CD: KIDQUAKE!
Artist: The Not-Its!
Audience: You.
Sounds like: Nothing like what you would hear on Top 40 radio… so it’s good.
Buy from: iTunes and bandcamp on February 5th
Random Thought: If they are all not it, then who is it? That is existential, man.
Tweet Sized Review: I never thought kid’s music could be like this. Being a dad won’t be so bad!

I’ll start off this, my first review on Dadnabbit, by saying that I am a new dad. My daughter will only be 4 months old when this album comes out. This should tell you a couple of things. I don’t know much about being a dad so far. I also don’t know what the heck I’m getting myself into. While I have some ideas, I still don’t know. Finally, I’m struggling with the thought that I will have to give up my radio dial/iPod dominance in the car.

These thoughts/fears became a little easier to stomach after listening to the latest offering from The Not-Its!. The fearless leader of our blog said that he had this album in mind for me and was interested in hearing what I thought about kindie. I of course thought he typed the word kidney wrong and was hoping he wasn’t going to ask me for one, but after I realized that kindie was a music genre, I was in. I am excited that The Not-Its! were my first exposure to this much needed genre of music.

I am a SKA/Punk kid at heart and KIDQUAKE! made the kid inside me (and the adult on the outside) smile and consider skanking it up. The Not-Its! do a great job of mixing (WARNING: Cheesy music review language ahead) tasty licks, catchy melodies, crunchy guitars, a tight rhythm section, and positive and fun lyrics.

There is a lot to like musically and lyrically on this album. The first track, “KIDQUAKE!” sets a good tone with its energy. It is a track that will get your kids moving and maybe even busting out a little air guitar. “Busy”, track number three, is a true SKA song that will take you back to the mid-90s. It contains a nice horn line that I find myself whistling as I walk around the house. Not only is the album musically sound, I also enjoy the humor in a lot of the lyrics. Listen carefully and make sure to catch what they are saying in a song like “Busy”. The fifth track, “Temper Tantrum”, that starts off with an intro that includes a description of everyone’s little brother, is a very relatable song. It is also a great example of how The Not-Its! blend the vocal abilities of their members. Looking for more on this album? You even get a little country twang on track ten, “Walk or Ride”, which delivers a message of bike safety.

I would love to ramble on about every track, but the last one I’m going to mention is “Participation Trophy”. Hilarious? Yes. Musically sound? You bet. My favorite track on the album? Without a doubt. I’m not really sure what to compare it to, but it sounds like something any number of pop punk bands of the past 15 years could have released. You can probably figure out what the song is about based on the title. I’ll leave it at that and let you enjoy it.

I didn’t even mention who is in this band yet. Have you heard of Sarah Shannon? Well if you haven’t, she was a part of Velocity Girl who was well known on the scene in the 1990s, and that is pretty darn cool. Michael, the drummer, also played with Harvey Danger and I guarantee you know who that is. All of the members are very talented musicians (they all lend vocals on the album and many play multiple instruments) and it shows. They also care about music and the message they are sending out. Oh, and they also like to have fun. That’s what it’s really all about, right?

Do you love your kids? Instead of the new Twilight, I suggest you give them this album for Valentine’s Day. They will thank you. More importantly your ears will thank you. And while my daughter is just three months old at the moment, she stopped crying when I started playing this. That should be enough of an endorsement for anyone.

Get more from The Not-Its straight from their website.

Here’s a live performance of their song, “Let’s Skateboard”