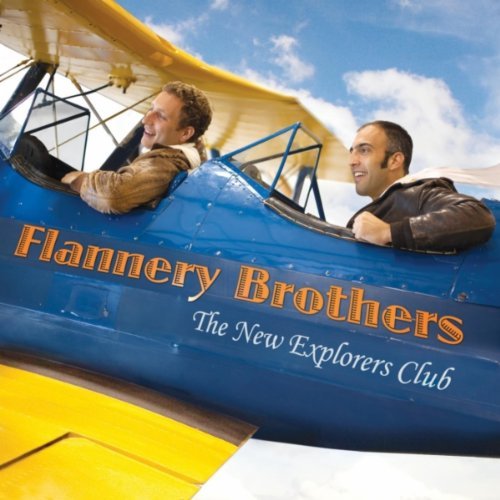 I know us parent types don’t often have a lot of time for reading, so in the interest of saving time, I’m going to cut to the chase: The New Explorers Club is my favorite family CD of the year. In fact, of all the dozens and dozens of CDs I’ve heard in 2010, this is probably in the top 20 overall.

“Who are the Flannery Brothers?” you’re probably asking, because this Northeastern trio has flown mostly under the radar since making its debut with Love Songs for Silly Things in mid-2009, and odds are you’ve never heard their excellent songs. The Flannerys’ lack of platinum sales has been a mystery to me, but as good as their first two releases were, New Explorers Club is such a huge leap forward that they just have to be destined for superstardom. I listen to a ton of kids’ music, and I’m telling you, this really is one of those rare albums that the whole family can enjoy.

There are a lot of things to love about this album, but I’ll focus on the two that I think are most important. First (duh) are the songs themselves, which are the catchiest and most cleverly arranged of the Flannerys’ career. I’m a sucker for a horn section, and The New Explorers Club features plenty of brass, coupled with toe-tapping beats, smart lyrics, and melodies you and your kids can sing along with together. If you’re a music geek, you’ll be impressed with the rock-solid songwriting that went into these tracks; if you aren’t, you’ll just be happy that, from the first track, the album is So. Much. Fun. How many children’s artists would include the line “where my toddlers at?” in a dance song, followed by a vocoder breakdown?

The other thing I love about The New Explorers Club is how dedicated the Flannery Brothers are to singing about outdoor play. When I was very young, my family lived in northern New Jersey, near the New York border and the Appalachian Trail, and I spent many hours trucking around the forest with my dog. Even after we moved to the California suburbs, I spent most of my childhood outside — splashing through creekwater, biking down hills that felt like mountains, and generally just staying out until I had to go in. After my daughter was born, my wife and I moved to the woods of southwestern New Hampshire, where we’re lucky enough to be able to set our kids free to roam, but for a lot of kids, the outdoors are an abstract concept.

Playing outside has been a recurring theme in the Flannerys’ work, and as you might expect from an album called The New Explorers Club, it pops up repeatedly here — in fact, the first two tracks, “Big Kite” and “Swallowed a Bug,” are all about how much fun it is to get out and make your own adventure. Unlike a lot of their peers, however, the Flannerys are never didactic; you get the sense that they sing about this stuff because they still feel it. They understand the need to find a “Quiet Place,” they remember lying on the “Kitchen Floor,” they know the fun of looking for “Sea Glass” — and they still have enough childlike whimsy to come up with their own dance (the bootytastic “Hi 5 Dance”), compare shapes and sizes (“In the Middle”), and have fun with a pair of soundalike words. Dig it:

The New Explorers Club comes out October 18th. Stream it at the Flannery Brothers’ website — and order your copy today. You (and your kids) will be glad you did.