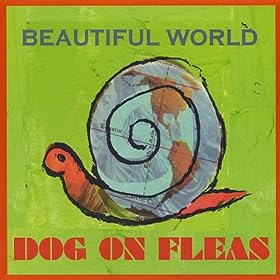 Until I listened to Beautiful World, I’d never heard of Dog on Fleas, but now that I’ve let the album play on repeat a few dozen times — and I know it’s the band’s fifth kids’ collection — I’m making it my mission to find out where they’ve been all my life.

I have to be honest and tell you that Beautiful World failed the Sophie Test — despite my enthusiasm for Dog on Fleas, my three-year-old has never shown much of an interest in these songs — but I don’t care, because this is one of the smartest, most adventurous children’s album’s I’ve had the pleasure of listening to. The band is known for its freewheeling experimental approach to record-making — their debut was apprently recorded around a single microphone, and 2006’s When I Get Little adopted a world-music feel — and Beautiful World reflects this, making room for everything from gently loping ballads to falsetto funk workouts, and utilizing everything from kazoos to electronic flourishes in the process.

It’s a lot of fun, no matter how old you are, but since this is a kids’ record, Beautiful World also comes packed with an assortment of positive messages about self (“Star Tonight”), family (“Crawl to Your Mother”), people in general (“I Love Your Accent”), and the world (“Water Planet”), with all the pure silliness you’d expect, too (“Do You Wanna Know My New Dance Step?,” “Balloon Man”).

Beautiful World is obviously targeted toward a youthful audience, but it’s an album I wouldn’t mind listening to even when the kids aren’t around — and I just might toss a track or two into future editions of the Popdose Friday Mixtape, just to see if anyone picks up on their tunes-for-tots origins. Great, great stuff.