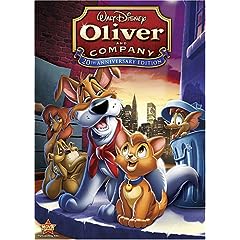 We look back on The Little Mermaid as the movie that lifted Disney out of its long journey through the shadow of the valley of cheesy live-action features (like 1981’s Condorman) and subpar animated adventures (1985’s The Black Cauldron, natch), but the truth is that the process was really more gradual. Giving the fishtailed Ariel all the credit for the Disney revival leaves out a handful of quality movies, including 1986’s The Great Mouse Detective — and 1988’s Oliver and Company.

It’s been sort of swept aside in the second Disney golden era — it wasn’t even released to the home video market until the late ’90s — but Oliver‘s box-office success helped lift the studio out of its doldrums, and the movie was notable for a number of other reasons, too: It was Disney’s first animated musical since The Fox and the Hound, it marked the studio’s first use of extensive CGI (more on that later), and it helped kick off the era of big-name celebrities clamoring for voiceover work, employing the services of Billy Joel, Bette Midler, and Robert Loggia. (It also includes the voices of Dom DeLuise and Joey Lawrence, but hey, you can’t win ’em all.)

Fortunately for those who saw and enjoyed Oliver and Company in the fall of ’88, Disney is forever scouring its vaults for older features to reintroduce as “classics,” and now it’s Oliver‘s turn to receive the deluxe anniversary treatment. Yes, 2009 is technically the movie’s 21st anniversary, but why quibble? This beats another direct-to-video sequel, right?

What you have here is the original, Oliver Twist-inspired feature — in which a cat named Oliver (voiced by Lawrence) makes his way through New York City with help from a gang of talking dogs (led by Joel, who plays Dodger) and eventually finds a home with the pampered-but-sweet Jenny Foxworth — and for the anniversary edition, Disney has added a handful of bonus featurettes, including videos for the big musical numbers (Joel and Midler make musical appearances, naturally, and they’re joined by Huey Lewis, who sings the movie’s opening number, “Once Upon a Time in New York City,” and Ruth “Mr.” Pointer, who takes the lead on “Streets of Gold”), as well as some behind-the-scenes promo footage that was filmed around the time of the movie’s first release. None of them provide much in the way of added value, although “Backstage Disney: The Making of Oliver and Company” is unintentionally humorous, as it includes a lot of bragging about the studio’s use of the same hand-drawn animation techniques that Uncle Walt helped pioneer, as well as promises that no matter how advanced computer animation got, Disney would never forsake the traditional way of doing things. Whoops!

The movie hasn’t aged as well as some of Disney’s others — the plot is pretty threadbare, and some of the dialogue is rather atrocious, particularly Cheech Marin’s work as a four-legged Mexican stereotype named Tito — and the studio’s vaunted hand-drawn animation was, at this point, a far cry from what it had been 40 years before; it really doesn’t look all that different, in terms of quality, from an episode of DuckTales. Still, there’s something to be said for animation that has a bit of a rough edge to it, and watching Oliver and Company may make you feel nostalgic for the days when cartoons had a more human feel — more recent Disney features are certainly prettier, but they have a hermetically sealed look to them that can’t help but create a certain emotional distance. Oliver, for all its many flaws, takes you back to the old days — or the end of the old days, anyway.

Those who purchased the last Oliver release, 2002’s “Special Edition,” will notice that most of the content remains the same, including the bonus features; the main difference here is that the film itself has been digitally remastered, which adds a slight coat of polish but doesn’t take your breath away. For those consumers, this edition probably isn’t worth the $25, but if you have young Disney fans in the house — or you are one yourself — this slight but enjoyable entry in the studio’s canon is a safe investment.