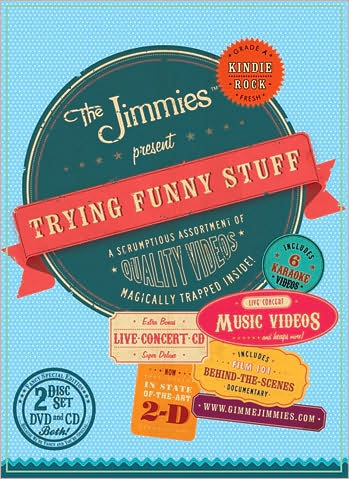 The disc kicks off with six music videos, all of which I now know front to back, thanks to the daily viewing regimen my daughter has imposed since Stuff showed up in our mailbox a couple of weeks ago. Familiarity hasn’t bred contempt, though; these are the Lord of the Rings of kindie music video, with stellar production values to match the band’s smart, catchy songs. Hardcore Jimmies fans will already know five of the videos (“Do The Elephant,” “Spanimals,” “Cool To Be Uncool,” “Bedhead,” and “Taddy”) from YouTube, but I hate watching stuff on the computer, and besides, the band has been good enough to toss in a brand new video for “What’s That Sound?” END_OF_DOCUMENT_TOKEN_TO_BE_REPLACED