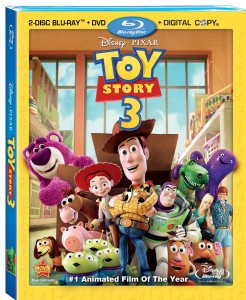 There is no doubt that Toy Story 3 is not only one of the best animated films of 2010, it’s one of the best films of the year. Period. Should there never be another adventure of Woody, Buzz and the rest of the gang, the filmmakers certainly went out on a high note. Toy Story 3 has it all: adventure, laughs, suspense and surprisingly, a lot of grown up emotions that come to the surface in what was definitely sold as a childrens film. The film’s climactic third act was gripping and near heartbreaking, while its epilogue was poignant and beautiful, bringing as many adults to tears as the kids.

If you haven’t seen this blockbuster film, here’s a brief synopsis: Andy, the beloved owner of the toys in the first two Toy Story films, is now 17 and heading to college. His mom gives him an ultimatum: pack up his old toys before he leaves for school of they wind up in the trash or donated to a local day care center. Through a mix up (there’s always a mix up), our beloved toys, who have been pared down to the core favorites- Woody (Tom Hanks), Buzz (Tim Allen), Jess (Joan Cusack), Bullseye, Hamm the Piggy bank (John Ratzenberger), Slinky the dog (Blake Clark, replacing the late Jim Varney), Rex, the not so scary dinosaur (Wallace Shawn), Barbie (Jodi Benson), the Potato Heads (Don Rickles and Estelle Harris) and their adopted alien toys – nearly get crushed by a compactor, but then are driven off to the Sunnydale daycare center.

Woody is upset. He insists that being sent to Sunnydale is a mistake. Of course, the others don’t believe him. Besides, Sunnydale looks like the perfect retirement home. The gang is greeted by a parade of new toys, led by the ever-cheerful Lots-O-Huggin Bear (Ned Beatty) and his right hand doll er, man, Ken (Michael Keaton). Ken is immediately smitten with Barbie and Lots-O-Huggin sets the gang up in a room where children will play with them all day long.

Woody makes his escape, adamant that he should be with Andy. Meanwhile, the gang finds out that Sunnydale has a hierarchy and that all new toys must start at the bottom rung— with the toddlers, who beat and paint and slobber all over toys. This isn’t heaven; it’s toy hell. As you’d expect, Lots-O-Huggin wasn’t telling the whole truth. The gang, now led by Buzz, tries to clear things up with Lots-O-Huggin. Meanwhile, Woody winds up in the home of an adorable little girl named Bonnie, who has just as rich an imagination as Andy did when he was a little boy. Through the efforts of some new toy friends (voiced by Bonnie Hunt, Timothy Dalton, Jeff Garlin and Kristen Schaal) Woody meets at Bonnie’s house, he learns the dark truth about Sunnydale and sets off to rescues his old friends. END_OF_DOCUMENT_TOKEN_TO_BE_REPLACED