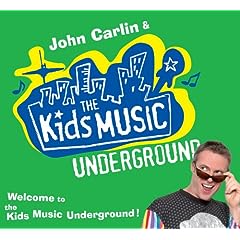 Way back in the dark, grungy days of 1993, when every label was looking for the next Nirvana, I received a package from RCA containing the self-titled debut from a band called 700 Miles. The record didn’t do anything on the charts, and I was pretty vehemently anti-grunge, but 700 Miles still stuck with me — particularly the songs “Messages” and “Cherish This” — to the point that I was probably one of maybe two dozen journalists who called RCA’s publicity department to request the band’s second effort, Dirtbomb.

Now, 700 Miles wasn’t the best band in the world, but I’ve always had a soft spot for the underdog, and later in the decade, I checked around to find out what happened to the band members after they went their separate ways. I knew frontman John Carlin moved on to a solo career, but for whatever reason, never got around to covering or purchasing his albums; all I knew of his work was the harrowing stuff he did with 700 Miles. So imagine my surprise a few years ago when I learned that Carlin had started a new career as a children’s musician — and the sort of children’s musician who wears brightly striped shirts and decks out his album artwork in Day-Glo colors.

If Welcome to the Kids Music Underground is musical carpetbagging, it doesn’t show in the songs; it might come clothed in some goofy packaging, but the contents are breezy, funny, and sensitive. Even better, the album has what might be the biggest age range I’ve heard in a kids’ record in some time — these 14 songs have something to appeal to young ones (“A Dinosaur Named Fred”), not-as-young ones (“Meet You at the Playground”), and even pre-teens (“Air Guitar”). Hell, “Jambalaya Road” has as much authentic New Orleans flavor as Huey Lewis and the News’ “Old Anetone’s,” a song I remember finding fairly funky at age 14. It resists pandering to its audience as successfully as any children’s album I can remember hearing, and the songs are terrifically catchy — not to mention short enough to fit young attention spans.

In the liner notes, Carlin says the group “journeyed far and wide, through our imagination and beyond; one stop was Brazil, where we discovered a different language of music” — but Underground isn’t exactly Rhythm of the Saints, if you know what I mean. Any world music influences have been blended pretty finely into Carlin’s own brand of well-written pop, which is nothing but a good thing. Purchase it for your brood now, and thank me later.