To grown-ups of a certain age, Dan Zanes is best remembered as a member of the late, lamented Del Fuegos, whose ’80s records never found much of a toehold on the charts, but have acquired a fervent cult following in the years since the band’s demise. But to kindie kids and their parents, Zanes is one of the founding fathers of the genre — an artist whose boundless thirst for all forms of musical expression have led him bounding along a beautifully unpredictable path, from folk standards to show tunes, pop to reggae, Spanish to English, and back again.

A new Dan Zanes record is always cause for celebration, and his latest family release, Little Nut Tree, is no exception. Along with his regular cast of characters (the “Friends” in “Dan Zanes and Friends“) as well as a small army of special guests, he’s served up a joyous blend of traditional numbers and songs that simply sound like you’ve always known them. Dan was kind enough to take a few minutes out of his schedule to talk about a variety of topics, including past albums, his thoughts on songwriting, and — of course — Little Nut Tree. 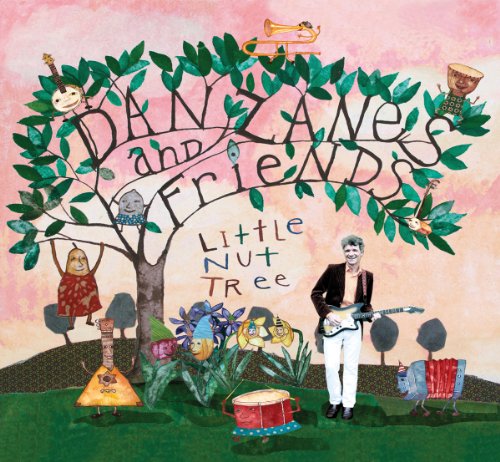 This is being billed as your first family album in five years, but you haven’t exactly been away for that long.

Yeah, that may not be the best way of describing it, but we couldn’t come up with anything better. I’d say it’s our first “mixed bag” family record in that period. I’ve released others along the way, albums with themes, but it’s all family music. On the other hand, this one is the most like the music I started making in the beginning — it’s one that I think the most people will be able to kind of rally behind.

I know you do a lot of work around themes. What made you decide not to take that approach this time around?

It just seemed like the right thing to do. I think we were all getting a little burned out on themes around the time of Seventy-Six Trombones. We’d sort of been given the gift of diminishing sales for that series of albums, so that told me it was time to get back. I mean, I think they’re all great records, but…particularly Nueva York!, I mean, that was exactly what I needed to be doing at the time. Maybe following up a Grammy-winning album with one that’s entirely in Spanish isn’t the best idea from a business standpoint, but I really felt totally committed to it, and I wouldn’t have done anything differently, even if it cost us momentum.

It was the right thing at the right time. I felt like the integration discussion was getting so ugly, and it was important to paint a different picture for kids who needed to imagine another kind of world. It felt like it was clearly the right thing to do. Seventy-Six Trombones, I needed to be talked into a little bit, and that probably should have been my sign. It was a really fun project, but the world doesn’t need to hear Broadway songs from me. That isn’t what anybody’s looking for.

It’s interesting to hear you touch on the business side of things. It makes sense, but your image as a family performer is of this happy-go-lucky Pied Piper who just dances along and sort of makes albums without really meaning to.

Yeah. Well, that is sort of true, in a way, but it’s also — particularly in these times, there’s a survival element for artists, and if you can’t make it work from a business standpoint, then there’s no more dancing. I really love making albums, but it’s a very difficult time to be making recorded music in a way that works financially, and I think it’s about to get harder.

Let’s go back in time a little. You started recording — and I started falling in love with music — during the ’80s, a time when it was really hard to make a natural-sounding record. Your band, the Del Fuegos, was essentially a roots rock outfit, but there was still a lot of production on those albums. But when you started releasing family music, you made a point of, in your words, trying to make albums that sounded like people in a room together.

There was this movement in family music at the time where people thought that if they had the production values that were prevalent in mainstream recordings, that was a way to reach a wider audience. I never felt that way — I thought it was the opposite. If the goal is to encourage young people to make music, then…well, you know, for me, I grew up listening to Leadbelly records. It sounded like he was in my kitchen. And if I can picture him in my kitchen, then I can picture myself right there with him. That presence — that feeling of the music being in the place where the people made it — was in the albums. You could feel it.

I feel like the studio is the most abstract sound. You don’t know where the music is coming from when you hear high production values on an album. So we made the records in a house, and we made them to sound like they were in a house. Now, I make them in a room just around the corner from where I’m sitting now, but it’s set up to be essentially the way my living room was, and we all just pile in there together and do it. That sound is really what’s important to me.

On your family albums, you tend to bob and weave a lot between originals and standards. Is it ever daunting at all to blend your own songs in with traditional music that everyone already knows?

Well, the songs that people already know are always so much better than my own. But on the other hand, I feel like I can write songs, and I’d never put one on an album if I wasn’t completely happy with it, and it wasn’t something I totally love. It is a little daunting sometimes, but if I can keep it personal and keep it small, and make it sound interesting in some way, I feel like I’m keeping things on track. We go through a lot of songs to get to the five or six originals that make it on these albums.

What’s your journey through the American songbook like at this point? Are you still discovering standards that are new to you?

I think the thing now is really…I hope to do some recordings with Elizabeth Mitchell and her family, and when that happens, we’ll probably lean heavily on old time music. But for me right now, the thing I really want to understand is — America is changing so fast, and there are so many people here from other parts of the world, that the old Anglo-American tradition just isn’t who we are anymore. So for me, what I’m trying to do more and more is understand the music of everyone that’s here. The Great American Songbook has to be in ten different languages now, for starters.

A lot of times, teachers don’t necessarily have the resources to find the songs that are relevant to address the traditions of their students. We’re lightly chipping away at it, and there’s obviously work to be done in this area outside my own records. I think a lot of young people don’t necessarily feel welcome, or they might even be ashamed of their culture, because it isn’t the accepted norm. In music, I feel like we have the possibility for a greater spirit of inclusion, so I’m trying to help. It’s a start, but it’s something, and we always learn a lot.

You’re touching on something I wanted to ask you about, which is your long-standing affinity for music from other parts of the world. Knowing that you’re essentially playing to kids whose parents’ first contact with world music was Paul Simon’s Graceland album, do you feel a responsibility to educate your listeners about other cultures?

Really, I’m just a curious musician. I love to find out what’s happening, and now, at this point, it’s less “world music” than it is “music of the U.S.A.” The only responsibility I feel is as a white person who’s sort of examining, from the inside, the way white culture has been a steamroller — so dominant, for so long, and it’s made it difficult for other cultures to be heard. I want to gain a deeper understanding of that, and try to talk to other white people about taking a look at it. We’re not representing the world we live in, and it’s important to adjust that. The other stuff, the music, is the fun stuff. Learning the songs that people around me are playing — that’s just something I love to do.

You’ve found a pretty seamless way of expressing those ideals in your own music. Little Nut Tree, in particular, is a really enjoyable album.

Well, it is a party. I love playing with all these incredible people around me — and our guests, people like Sharon Jones and Andrew Bird. They’re incredible. Everyone is so soulful and deep, and it’s wonderful to have them all come together.

The last thing I want to ask you about is how much you practice now. I’m always interested to hear about this, because each musician’s approach to their craft is so different.

I went through a period recently where all of a sudden I went to a show and started playing guitar, and my fingers were really soft. I don’t know what I’d been doing with my time, but I hadn’t been practicing, so lately, I’ve been playing for hours a day. I think I’m going to stay on this track, because it’s great — I love it. I just picked up an electric guitar in the thrift shop around the corner, and I’ve been playing it constantly.

I moved recently. For about three years I’ve been stoopless, but the new place has a front stoop, and so I’m finally in a place where I can sit out front and play while watching people go by. I’m also going to be scoring a Buster Keaton movie, Steamboat Bill, Jr., in January, so if I stay on my practice trail now, I’ll be in good shape for that.