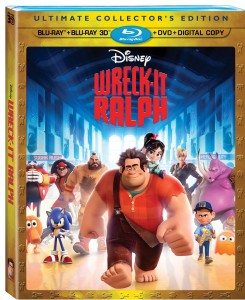 I didn’t see Wreck-It Ralph in the theaters and I still haven’t let my almost 4 year old watch it. While a highly enjoyable movie, I wouldn’t recommend it for the under 5 crowd. But holy cow, is it fun for anyone above that age.

The attention to detail throughout the movie is ridiculous. The filmmakers made sure that every single die hard video game fan would find something to smile about. At times it felt like I was watching a cartoon version of the television show Community with all the pop-culture references and meta jokes. It successfully appeals to die hard gamers and casual observers like myself.

The movie follows the tale of Ralph (voiced by John C. Reilly), the bad guy from a game called Fix-It Felix. Sick of being the bad guy, he starts game jumping (a big no-no) while the arcade is closed. As you would expect, this leads to lots and lots of mayhem. I won’t give away all the details, because frankly not knowing what to expect, made many of the moments in the movie so enjoyable.

The voice work is something to behold. One that really stuck out to me was actor Alan Tudyk and his character, King Candy. It’s a hardcore tribute to Ed Wynn’s Uncle Albert from Mary Poppins, and he absolutely, positively nails it.

It’s not a perfect movie. The idea of this movie is better than the overall story execution. But, let’s be honest. That’s just me nitpicking. This was a damn enjoyable movie. I’m still trying to figure out how Brave beat this movie at the Golden Globe and Oscars. The movie is big and brash and yet, very sweet,

Wreck-It Ralph is available at all places where you can get movies, like here.

Check out the clip on the creation of the 8-bit world.