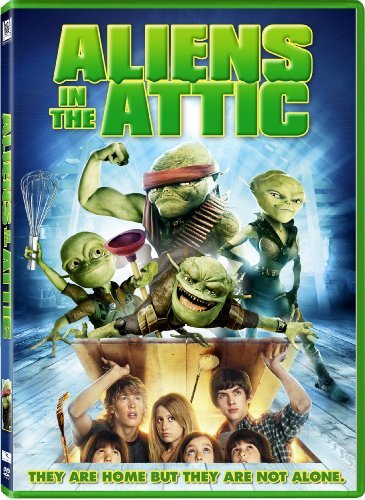 In the film, Carter Jenkins stars as Tom, a straight ‘A’ kid who’s throwing his grades in order to look cool. He’s tired of being a mathlete and the butt of the jokes for all of his peers. Even among his family, Tom feels like a loser and an outsider and thinks that his brainpower will never get him anywhere. Tom has an older sister, Bethany (Tisdale) and an adorable little sister, Hannah (Ashley Boettcher). After they’re reprimanded for trying to fix his grades by hacking into the school computer, Tom and his sisters are dragged on a family vacation by their parents (Kevin Nealon and Gillian Vigman) to spend time at a summer house with their uncle (Andy Richter), their Nana (Doris Roberts) and their three cousins, Jake (Austin Butler) and twin boys, Art and Lee (Henry and Regan Young). Showing up unexpectedly is Bethany’s skeezy boyfriend, Ricky (Robert Hoffman), a college student lying about his age in order to score with his recent high school graduate girlfriend.

Enter the aliens (who hole up in the attic), four pint-size creatures sent to Earth to dig up a device buried in the basement of the house. The kids discover the extraterrestrials and soon learn their plan to invade our planet. While they may be small, these aliens have technology that allows them to take over the minds and bodies of adults (kids are “wired differently,” so they aren’t affected by the device). Throughout the movie, Ricky is under the mind control of the aliens. Hoffman is quite the physical comedian and performs enough pratfalls to make John Ritter proud. The best moment with this gadget occurs when Ricky battles Nana in a mind controlled kung fu fight. The action is exciting, but very, very funny, as well. One- liners are zinged by the kids at rapid fire pace while Doris Roberts and her body double perform roundabout kicks and flip through the air like Jackie Chan.

Obviously the kids are going to win the battle with the aliens (who are voiced by Thomas Haden Church, JK Simmons, Josh Peck and Kari Wahlgren), but it’s the journey that makes the film fun. Tom quickly figures out that all of his math knowledge has an advantage as he leads the kids in the battle down the alien invaders. If there is a message in this film, it’s to believe in yourself for what you are, and that being smart is a good thing. There is also a nice theme about family and loyalty that resonates throughout the film.

All of the young actors in this movie are exceptional. Jenkins is required to carry the movie on his back and he does so effortlessly. Tisdale is more of a supporting character, but she shows that she has comedic skills. Hoffman is hilarious; he goes from scumbag to alien puppet in an instant and provides a great deal of comic relief. Speaking of comic relief, the cast of adults in this film are all a joy to watch. Nealon and Richter bring all of their comic genius from their years on television and create three-dimensional, funny characters. Doris Roberts proves to be a good sport as her character becomes a kung fu warrior, and Tim Meadows, always a joy to watch, shows up as a local lawman and nails every joke he’s given. Unlike so many family movies, the parents are not idiots. Silly, yes, but not idiots.

Although the end seems a little rushed, that’s a minor (minor) complaint against the movie. I think it’s the perfect flick you can sit down with and watch with you sons and daughters who are older that 6 and have a great time.

The DVD features on Aliens in the Attic are pretty decent. The deleted scenes show that Schultz made the right choices in his cuts. There is a featurette that is all about Tisdale, a comical fake commercial called “Kung Fu Grandma,” and an alternate ending that would have been a lot less satisfying.