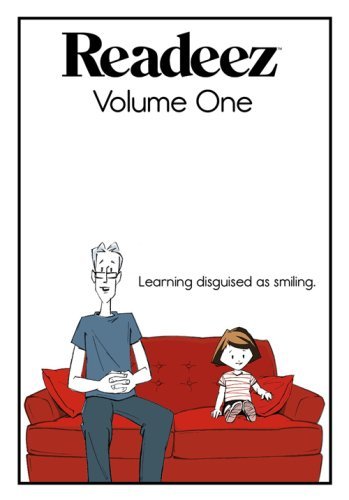 If you’ve been reading Dadnabbit for any length of time, you know how much we love Readeez — and with the debut of Omneez, a new line of Readeez for your computer or mobile device, we decided now would be the perfect time to sit down for a chat with Michael Rachap, the voice of “Julian Waters” and the mind behind all that bite-sized educational goodness. Here’s a look back at where the series came from, where it’s headed, and more…

I think we should probably start by talking about Readeez.

One of my favorite topics!

What gave you the idea to take this approach to creating children’s media?

I wish I knew. There was an evolution. I’ll tell you the way it didn’t start — with me saying, “I’d like to teach children to read.” It actually had to do with one of my poems — I’ve been a musician all my life, but I hadn’t really recorded anything that was worth putting out there, so it started with words. “In the beginning, there was The Word.” (laughs)

I found a tape of myself playing music on a cable access show that my friend did, and I read a couple of poems and mentioned that I really love the way words look on the page — typography, you know, playing with the prosody, the form. I guess it really started from there — from visualizing poems. It didn’t take long to get from that to visualizing music.

Around ’99 or so, I walked away from my career in copywriting and went to the Berklee College of Music, and now this is what I do: I write and record songs. One of the things about Readeez is that they’re stealth delivery mechanisms for my songs — I’m a studio guy more than a live performer, and this is another way for me to get my music out there.

Your copywriting background really comes through, because these are, obviously, very short songs. I once read an interview with Paul Brady where he said the hardest thing about pop songwriting was saying everything in three minutes, and with these songs, you’re distilling them even further. It’s funny to hear you say you hadn’t really recorded anything, though because Readeez contains some of the best-written kid’s songs I’ve heard — they’re just these smart, tightly constructed little pop gems, really firmly grounded in classic songwriting components. Not only are they lyrically clever, but they’re melodically solid in a way that I think any parent who loves music can appreciate. 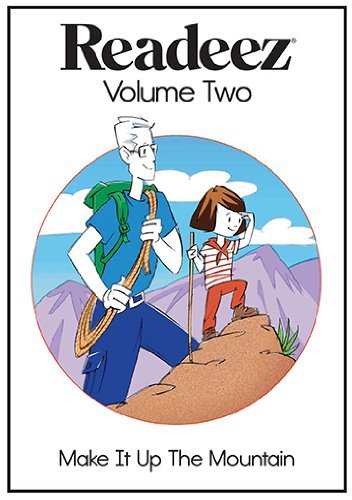 Melodies come to me really easily. I come at it both ways — either with a title and work from there, or I just sit down at the piano until a melody starts to form, and take the lyrics as they come.

How did you arrive at the idea for the characters of Julian and Isabel Waters?

I wanted an alter ago for myself, and Julian is tall and skinny and wears glasses like me. “Waters” is a tribute to Bill Watterson, because I’m such a Calvin & Hobbes fan. And “Julian”…I have two sources for that. One is that Groucho Marx’s real name is Julius, and the other is the Pulp Fiction character Jules. Nice kid-friendly reference there. (laughs) Really, the Waters family — they have this whole mythology I’ve constructed that we haven’t even gotten into yet. The town they live in, other members of the family…we’ll get there.

What about the animation style? How much of that came from budget or time constraints, and how much was by choice?

It’s 50/50. I don’t know how to do animation and I can’t draw, so I’m kind of embracing my limitations in that sense, but it turns out that I prefer the way Readeez looks — and it also turns out that it’s better for the purposes of reading instruction. So the way they look, both in terms of the graphic design and in terms of the motion involved, is a deliberate choice that kind of dovetails nicely with the fact that I can’t do much better than this.

It’s funny, because the first time I watched a Readeez video, I thought, “Wow, this is really low-budget” — but if my kids ever noticed, they never said anything about it. They still love the characters and they love the songs. That’s kind of an interesting commentary on the in-your-face style of animation that’s so popular now.

I once wrote a little marketing blurb that said if you take two televisions and put Readeez on the left and Nickelodeon on the right, kids’ eyes will gravitate toward the faster-paced stuff. But if you make a choice between Readeez and nothing, the kids will adore Readeez. (laughs)

I think there’s something to be said for the opposite of all those garish colors, high-speed motion, and loud noises. I hate it. I can’t stand it.

What’s striking to me is that I think from Ren & Stimpy on, animation has increased its focus on the inhuman. You really don’t see the parent-child relationship in animation, and that’s my focus. Turn on PBS Kids, and you see all kinds of three-dimensional CGI characters, but you don’t see a human parent or child.

And even more important than the animation is the music. My daughter loves the songs, and when you released Songeez, we were really excited.

The songs are really kind of this campfire glue that you and your kids can bond around. Classic songs like “Camptown Races,” or stories that your parents read to you and you grow up to pass on to your own children — that’s really the kind of thing I’m aiming for with the Readeez songs.

Last year, you moved into math, with Matheez.

I’ve been working toward curriculum-specific things, because I want to reach more people. Musically, Matheez is kind of Sesame Street-inspired — you know, those old counting songs they did, with simple visuals. You have two blocks on the screen, and now there’s two more, so you have four. The next thing I’m working on is clocks and calendars. My vision is that 15 years down the road, there will be maybe 500 Readeez, and you’ll be able to go to the website and search for them by topic. You know, “I want something about holidays,” and there it is.

One last question: Any plans to record an album of full-length songs? Maybe even one for grown-ups?

Yes, I think so. I got married in October, and my wife is a superb musician — she plays piano, guitar, drums, and teaches — and she and I are going to be working as a duo. We don’t have enough creative outlets in our lives. (laughs) We’re going to be busking and playing around Atlanta, where she owns a music school, and I teach sometimes, and I’ve got Readeez, so we have enough to talk about when we play out. I do occasionally have things that just aren’t Readeez material, but they’re songs that want to come out, so I record them anyway. Like “Sky Girl” — that’s three minutes long. It’s like the “Stairway to Heaven” of Readeez. So over-the-top long.

That’s probably at the top of the pile for my solo disc, or however this takes shape.

I think publishing a book of poems is in the cards. I’ve got like 50 poems, and they’re not necessarily for kids — about love, and stuff that kids aren’t necessarily going to get. I’m calling it I Hate Poetry Too: Verses for the Verse-Averse. (laughs) So look for that probably this month.

You know, before we go, I want to say something else about Readeez. We’ve talked a little about the emotional story behind the concept, and how it’s a way to develop a lasting bond between parents and kids. But there’s the rational side of it too, which is that they show you words along with pictures — they’re kind of like flash cards that tell a story. It’s a really natural way to learn to read, and I didn’t want to let that slip by, because I know parents have so many options to choose from. They’re catchy songs, but they’re more than that — they’re also instructing in the pronunciation and spelling of words, syllable after syllable.

They’re wonderful. I love them. Thanks, Michael.