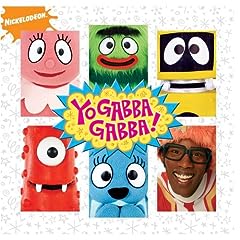 For the record, I can’t watch this show — I want to punch DJ Lance Rock whenever he comes on the screen, with his big grin and all of his hand-talking — but I know when I’m beat, and for the last couple of months, my three-year-old has been obsessed with Yo Gabba Gabba! Also, much as DJ Lance gives me the creeps, I have to admit that any children’s show that makes me stop in my tracks on the way to the shower and ask “Why is Elijah Wood dancing with a yellow robot and a bumpy red cyclops?” can’t be all bad.

If you have young children, you probably already know about Yo Gabba Gabba!, which has supplanted Jack’s Big Music Show as the hip, with-it kids’ show du jour, and a magnet for such unlikely guest stars as Wood, Biz Markie, Rahzel, Laila Ali, Tony Hawk, Sugarland, the Shins, and Mark Mothersbaugh. It’s utterly ridiculous, and easily the most unsettling form of children’s entertainment that I’ve laid eyes on since cowering in fear during an accidental late-night viewing of Boohbah. It’s also oddly addictive, which is why anyone with a YGG! fan in the house will want to run far, far away from the Yo Gabba Gabba! soundtrack album.

YOUR KIDS WILL LOVE IT.

First of all, it’s just a tiny little thing — less than half an hour in length. Second, the tracklisting is a genius blend of skits from the show (“Biz’s Beat of the Day”) and standalone songs. My favorite is the Salteens’ “Be Nice to Animals,” but there are a handful of non-annoying musical numbers, including the Little Ones’ “Hey, Won’t Somebody Come Out and Play” and the Roots’ “Lovely, Love My Family.” The end result is something your kids will clamor for over and over again, because it’s full of stuff they want to hear and it doesn’t last long enough to bore them.

I’m just warning you — if you give this to your children, prepare to surrender your radio for a period of several weeks. And prepare to find the songs stuck in your head at odd moments, or to hear and/or say the phrase “there’s a party in my tummy” far more often than you’d ever thought possible. Prepare also to possibly pay a visit to Target in search of some of the righteous YGG!-themed swag for sale, including the Muno-shaped talking guitar. Proceed with caution.